Healthy cat - healthy photo - by fofurasfelinas (see sources at base)

Feline Anemia as many will know means that there are insufficient red blood cells in the blood system. Red blood cells carry and circulate oxygen around the body. The symptoms of anemia are, as a result, a deficiency of oxygen being fed to the cells of the body.

Although kittens can have slightly lower levels, from a veterinarian's point of view, if the level of red blood cells for an adult is less than 25% of the total volume of the blood the cat has feline anemia.

A cat with feline anemia may have another disease (perhaps a chronic condition) the symptoms of which can mask the effects of feline anemia. The direct symptoms however as described in the Cat Owner's Home Veterinary Handbook by Drs Carlrson and Giffin are rather unspecific and include:

Both symptoms for severe feline anemia can be confused with heart disease. A more specific sign perhaps is that the gums and tongue are pale.

1. Not enough blood is produced by the cat. This accounts for about 80% of the cases. Red blood cells are produced in the bone marrow of bones. This is the area inside the bone, which could be described as hollow.

Human bone marrow greatly magnified - a plate from Gray's Anatomy the copyright for which has expired due to effluxion of time. The average life span of feline red blood cells is 66-78 days. 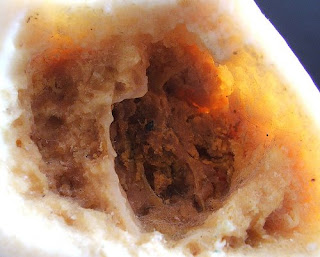 Cooked (at a restaurant) bone marrow showing the hollow nature of a bone. Photo by Ben Scicluna published under a creative commons license =
Attribution-NonCommercial-NoDerivs License.

In turn, what causes the lower level of production of red blood cells? This could be diet as the materials to create red blood cells in the bone marrow are:

These ingredients are supplied to the "bone marrow factory" in the food the cat eats. Of the four elements a deficiency of intake of iron is a major cause of feline anemia. Accordingly, a diet low in iron could cause anemia. However, blood loss reduces the amount of iron in the body as it is carried in the red blood cells. Although this may be seen as a circuitous argument as the iron lost in the blood has already been "assigned" to red blood cells.

In addition to a poor diet another reason for a deficiency of the building blocks of red blood cells could be disease. Feline leukemia and feline infectious peritonitis are examples. Poisons to the body can also have a similar effect and some drugs could be classified under this heading. Many illnesses lower red cell production in fact.

2. Another reason for depressed numbers of red blood cells, and therefore feline anemia, is loss of blood. This may not be apparent as the loss could be internal. If internal there may be abdominal distension and low body temperature. Bleeding into the abdomen can be caused by trauma, tumor or rat poison for example. Classic loss of blood is through injury (trauma). Blood loss can sometimes occur through the walls of the digestive tract caused by the presence of hookworm, tumor, ulceration, rat poison, toxic foreign body or gastric ulcer, for example.

Other reasons for blood loss could even be skin parasites that feed on the cat's blood. This may be relevant when diagnosing feline anemia in the poorly groomed and neglected cat.

If the lifespan of a red blood cell is shortened the effect will be the same as a lowered production of red blood cells. A condition called "hemolysis" is one in which the red blood cells are destroyed prematurely in the blood. This can be caused by infected blood (microorganisms) or drugs, for example.

Feline Anemia - Sources:
Photo: by this wonderful female photographer who works in South America (as far as I remember). She photographs her own cats and rescue cats. I think she likes calico cats. This cat is healthy as far as I know. It is simply here to illuminate this post. Thanks fofurasfelinas.