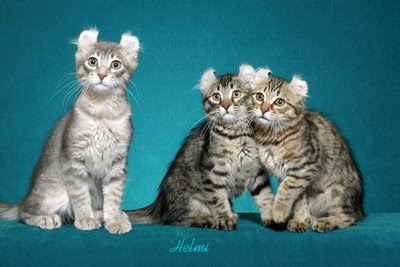 The famous curled ears are curled back in this photograph, which gives us a clue as to the age of these gorgeous kittens. It takes about 16 weeks for the ears to fully curl back and a show cat breeder will not know for sure how good the cat will be until the ears are fully settled into their final position.

As the ears are central to this cat's appearance the breed standard (CFA) employs quite a scientific approach to how they should look.

The degree of curl should be a minimum of 90 degrees and a maximum of 180 degrees. In other words (as I read this description), if the ears were in the vertical position and the fold begins somewhere about in the middle of the ear, the upper half of the ear should be horizontal if the amount of curl is 90 degrees. The American Curl kittens above in the picture demonstrate this perfectly and have on my reckoning a 90 degree curl (the 2 on the left). The kitten on the right has it seems a curl of about 100-110 degrees.

At a 180 degree of curl the top half of the ear will theoretically point downwards if the ear is vertical. The CFA breed standard says that the cat will be disqualified in competition if the following conditions are present in an adult American Curl cat, with respect to the ears:

--if there is extreme curl such that the tip of the ear touches the back of the ear or the head. (This could happen if the ear curled 180 degrees, I would have thought).

--if the ears have no curl (are straight)

--the ears are widely differing in size

-- if the ears are thick

--if the curled part of the ear is not flexible

The gene at work is the dominant mutated gene symbolized by the letters Cu. The curl is caused by a change brought on by this gene to the formation of the cartilage in the ear. Homozygous curled eared cats carrying this gene have not demonstrated any anomalies associated with it.