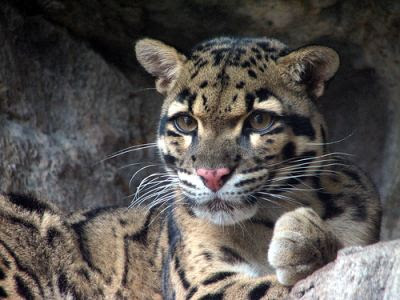 Here are three of the best clouded leopard photos. They are selected from Flickr photographers who have kindly granted a right to publish under a creative commons license. Of course they are all taken in zoos as nearly all clouded leopard photos will be; an indication once again of the fragile a position in which we place such beautiful wildcats usually by habitat loss as a result of mankind's voracious commercial activities. 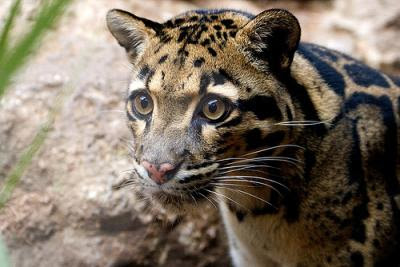 For me three things are noticeable about this gorgeous wildcat. The spots are similar but much larger than the spots of a some Bengal cats. Their shape and design have the appearance of clouds hence the name.

The other is the size. This is quite a small wildcat in relation the size of other wildcats that we are more familiar with; I mean the big cats such as the tiger, the biggest wildcat. The Clouded Leopard is medium sized weighing 33-50 lbs. At the bottom end of 33 lbs this cat is only slightly heavier than the biggest domestic cats such as the Savannah (F1 or F2) cat a wildcat hybrid. The Maine Coon a domestic cat for hundreds of years can weigh (although unusually) in the region of 25 lbs. So this is quite a small wildcat really. 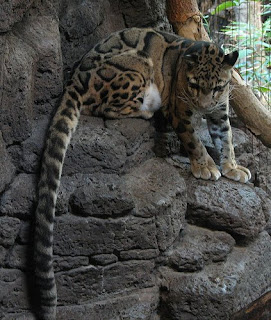 The third noticeable feature is the extraordinary length of the Clouded Leopard's tail, which you can see in this nice Clouded Leopard photo adjacent by guppiecat. This cat also has very long canine teeth at 2 inches the longest of any living (as opposed to extinct) feline. The extinct Saber Tooth Tiger probably had the longest.

Why is the tail so long? The answer is in the sort of prey this cat hunts, which includes macaques and gibbons, both tree dwellers and fantastic climbers.

This wildcat has a long tail to help maintain balance. The tail can be as long as the body. Large paws and an extremely athletic body make for excellent climbing skills including running down trees head first. My half Norwegian Forest cat could do that too.

Amazingly we don't know much about this cat. There are perhaps 10,000 in the world (2008). A camera trap recently photographed one in the Borneo jungle of Sebangau National Park in Central Kalimantan. This is jungle that has been logged excessively (another example of habitat destruction without taking responsibility for the wildlife depending on it). The Borneo Clouded Leopard is the top predator in Borneo.

s that take photographs automatically when triggered by a movement sensor) are a good way of researching the population, movement and habits etc. of this elusive and beautiful animal.

If there is an issue in publishing the photo here please tell me and I will remove it. Clouded leopard photos of non captive cats are hard to come by.