Eating cat meat is barbaric in my opinion. Some disagree obviously. I feel compelled to go on pounding away on this subject for the rest of my life until the people who prepare and eat cat meat change their minds. I am sure people know it is unacceptable and quite wrong. In China they justify it by saying it is a tradition. Does this sound like a reasonable justification? If the tradition has value then preserve it. If it is wrong lets get rid of it.

The reason why some sell cat meat is because the supply is free. All they have to do is round up some feral cats. It is partly about commerce it seems. The people of Guangzhou eat cat meat regularly. People created the feral cat "problem" and then some people compound the problem by killing feral cats in a cruel manner and then eating them. There are many things in the West that are wrong too (greedy financial experts to name one) but that shouldn't and will not stop me criticizing behavior in other countries if I feel it needs to be criticized. I have a right as an individual to do that. And people have a right to disagree - please comment.

It isn't just in China though where they eat cat meat (see cat meat name and shame posting). In addition to the countries listed on the name and shame posting, apparently (allegedly) it also happens in Kuwait. In this instance it was alleged that a restaurant was passing off cat meat as some other product. That is different but equally wrong. It is alleged that it was the Jahra branch of the Farah restaurant chain (not sure if this is a chain but that seems to be the case). 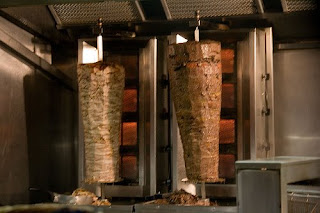 The restaurant was making shawarma by adding cooked from frozen cat meat added to other meat allegedly. Shawarma is a middle eastern style sandwich usually made up of lamb, chicken or goat meat. It is roasted on a spit at the front of the facility it seems a bit like kebab shops in England. How many kebab or shawarma shops sell cooked cat meat? Probably a hell of a lot more than we ever imagined.

I am convinced that it happens all over the world; I mean restaurants preparing cat meat and calling it something else. Why? Because it is free roaming around the streets outside the restaurant. They might think that they are doing a service to the community.

We must in my opinion deal with the feral cat problem in one way and one way only --- humanely because we must take responsibility for it. To deal with the problem otherwise is immoral and eating cat meat is barbaric in my view. I am speaking up for the silent cat here.

Eating cat meat is barbaric - photo above is shawarma in Ireland as it happens. No connection with cat meat as far as I am aware. The picture simply show what shawarma looks like. Photo by Fenchurch!

Eating cat meat is barbaric to cat meat name and shame
By Michael Broad at August 19, 2008