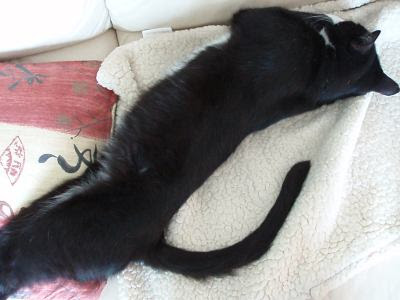 This roaming stray tom cat, Timmy, is more prone to feline aids but he is healthy at the moment. Snoozing after a human sized meal. Photo copyright Michael

From the name of the disease we know that feline aids amounts to a deficient immune system caused by a virus. The virus is a "retrovirus". A retrovirus is different to a "normal" virus in that it has to convert (reverse transcription) RNA to DNA before insertion into the host cell. Once inserted it clones itself in the same way a virus does. The transcription process is not that accurate so different forms of the virus are created making it difficult to treat. It is the reason why flu vaccines don't work most of the time on HIV infections (src: Yahoo Answers thanks to ksveb01).

The feline aids virus is a lentivirus. These are viruses with a long incubation period and they are part of the Retroviridae family.

The feline immunodeficiency virus was discovered in California in 1986 (or 1987?). In research work carried out at the University of Florida and released in 2005, a possible link between the feline aids virus and the human version was found. A vaccination designed for human AIDS was found to provide equal protection for cats (src: /www.eurekalert.org). The two viruses are breed specific, however meaning that HIV does not produce feline aids and visa-versa.

The disease progresses from the early acute signs (above) to latency (up to 3 years) to the chronic phase, the symptoms of which are:

Diagnosis
The large range of illnesses associated with feline AIDS (to be expected as the cat's immune system is severely compromised) are also similar to those that accompany:


Testing for feline aids requires care and includes ELISA, IFA and Western Blot Immunoassay testing. This is exclusively a veterinarian's area of operation.

Treatment
Treatment for feline aids is probably something the layperson knows a bit about as treatment for human aids is well publicized. In short millions of pounds and dollars are being spent on research (you wonder sometimes if the companies involved in research have a vested interest in not finding a cure or vaccine as it is big business). As of the date of this post I don't know of a cure for human aids and therefore the same applies to feline aids.

It seems that FIV cats are involved in animal testing. I am against animal testing but in this instance it would seem acceptable. AZT is used on people. AZT is more toxic to cats and can cause anemia and liver damage in high dosage. Results are it seems disappointing.

The best "treatment" is preventative action. Roaming and fighting toms are more prone to feline aids. Neutering male cats and keeping a degree of control over our cats is the better course of action. An indoor life with a large cat enclosure is probably the best compromise if workable.