January 27, 2009
Do ionizers hurt cats? Air purifiers often (always?) have a setting for sending out negative ions into the room. This is part of the air cleaning process. The purpose of negative goes beyond that, it seems. There are claimed to be a number of health benefits for humans including accelerating the delivery of oxygen to our cells and tissues. Ions also help to remove dust, pollen etc from the air. They apparently make the dust particles fall out of suspension in the air. The dust falls to the floor. You can make smoke fall to the floor as well. 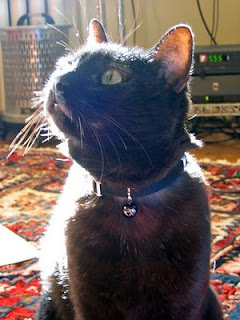 Can I smell ozone? Nah....Jeep sniffing the air - photo by abbyladybug

But it has been said that the ionizer setting on an air purifier should not be used if you have a cat. How can that be, I wonder, as a cat's anatomy is very similar to ours. We know that because cats are often used in animal experiments to test products designed for humans (I personally find that unacceptable). I am told that there is a lot of stuff on the internet which says that ionizers should not be used around birds as well.

Is it a question of amount? The ionizer creates ozone...which is a polarized oxygen. Particularly it creates negative ions of oxygen. Ozone in large doses can be pretty corrosive and hard on your lungs, human lungs. If those lungs are a lot smaller, it seems reasonable to suggest that the dosage needs to be a lot less to avoid causing harm. My initial thoughts (and I am not sure) are that ionizers are geared up for human use only and ionized air needs to be regulated to a certain level to be beneficial. Smaller animals might benefit from ionized air but the ionization needs to happen to much lesser level. If not damage can be caused. So people who claim that ionizers hurt cats may be correct. Do you know better?

Anonymous said…
ionizers and ozone generators are two different things it's the ozone that can be harmful to your cat
23 January 2013 at 19:11

Unknown said…
I'm so confused. I read so many different answers. So, is having the ionizer on with cats unhealthy for them? I have seven cats and a pit bull.
26 January 2017 at 11:27

Michael Broad said…
Yes, it is said that the ozone produced by the device when the ionizer is on can be unhealthy for cats but I'd do more research on this. Personally I would doubt that harm is caused. The article is simply putting up a flag to warn of the potential. Take care Sherry.
26 January 2017 at 12:11

Michael Broad said…
P.S. the key issue is not the ionization but whether the device produces ozone. Just check that. If it does produce ozone, the ozone, in sufficient, quanitities may be unhealthy for pets.
26 January 2017 at 12:18

Unknown said…
I was wondering the same thing, so i keep the feature on the purifier off all the time. I wonder if it still can go through the process of ionization even with that feature turned off, but perhaps i'm just being a bit paranoid because i don't know how that would even happen.
16 March 2017 at 19:55

Unknown said…
the reason you're hearing so many different opinions is because nobody really knows WHAT the hell they're talking about. Now what I just said is the ONLY thing that's for sure!!