Torties have a very distinct appearance. It is an impressive appearance, an almost chaotic appearance and a strange one. Sometimes the change in fur color dissects the nose as with the cat below right (this is a Flickr photograph published under a creative commons license - Attribution-Non-Commercial-Share Alike 2.0 Generic - it is by kangster).

This is called a "blaze" by cat breeders as I understand it. The lighter color on the nose of this cat is caused by the pigment called phaeomelanin (red/yellow pigment). It is an appearance that I personally like very much. But do we see this cat coat at cat shows and on show cats? We do, but not as commonly, in my opinion, as many other types of coat.

What are torbies? These are a mix of tabby and tortoiseshell. And there are cats too, that only have torbie pointing or cats that are torbie and white. And you've got the dilute torbies and silver torbies - I could go on; the range is almost endless and very involved. In fact, it gets really complicated. And I haven't mentioned all the combinations. As I can't show them all, I'll stick to some prime examples and an explanation as to what happens to make the fur tortoiseshell in appearance. First here is another good old plain tortoiseshell color on a fine Maine Coon cat - a great looker - the Maine Coons nearly always are:


So what is happening at a genetic level? There are two types of color pigmentation in individual hairs, eumelanin (black/brown) and phaeomelanin (red/yellow pigment). Domestic cats are either red because the pigment phaeomelanin is present or not if eumelanin is present. Tortoiseshell cats have a pattern of both pigments which are dispersed throughout the entirety of the individual hairs (i.e. this is a solid colored cat as opposed to a tabby cat, where the hairs have a banding of color within them). In other words torties are non-agouti cats. A lot of us know that tortoiseshell cats are always female, with rare exceptions. Why is this? Females have two X chromosomes. If a particular female cat is destined to be a tortie she will have received from her parents an X (Eumelanin) chromosome from one parent and an X chromosome (phaeomelanin) from the other. Each cell can have one X Chromosome activated. A factor in the creation of the tortoiseshell coat is controlled by X Chromosome Inactivation. This process only takes place where there are two X Chromosomes; hence only females are tortoiseshell cats. As the cells divide and multiply patches of the two different types of pigment are created.

The video shows the cats you see here plus more and some strange music - I chose it! The music complies with copyright law and I like it. Here are some examples of tortoiseshell cats: 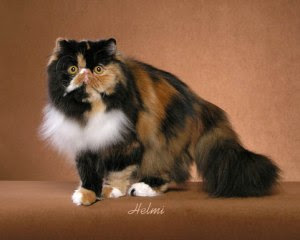 Black Tortoiseshell cat - this is a household pet or non-purebred cat but still a show cat - the photograph is copyright Helmi Flick. Please respect Helmi Flick's copyright of all her photographs. 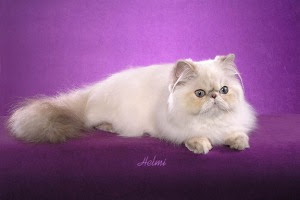 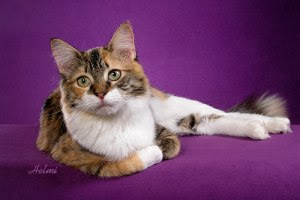 
Cat coats torbie
Cat coats tortie torbie and white
The tortoiseshell cats above are well loved, cared for and frankly pretty glamorous. Now lets briefly look at the other side of the coin. There is another report of a tortie cat being shot with an air gun. It happened in Herne Avenue, Herne Bay, England. This is on the coast in the south of England. An 18 month old tortie cat was shot in the spine with an air rifle (or hand gun). The pellet lodged in the spine. This cat will be lucky to survive. Apparently such cruelty tends to take place more in the school holidays indicating that it is school boys that are the culprits. Ultimately it is the parents who are to blame.

This is a criminal act punishable by a maximum of 51 weeks in prison and/or a £20,000 fine under the Animal Welfare Act 2006. The chance of the person being caught is minimal. The police in the UK just don't give a damn about this sort of crime.