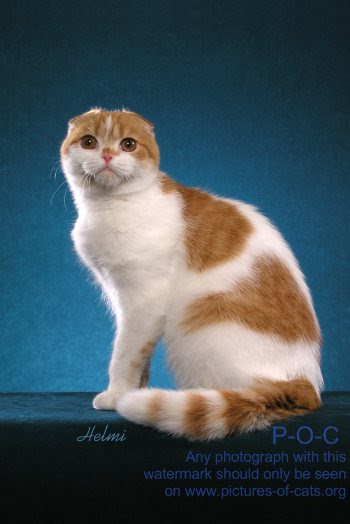 Photograph copyright Helmi Flick - please respect copyright, thanks. This picture is to show the appearance of the cat breed only. There is no connection between this cat and this post.

I know that people searching for Scottish Fold kittens want to land on a breeder's website, look at kittens, and start window shopping. That's fine but a look a fine example of this cat breed (above) plus some a little more information (on a rather difficult to talk about subject) may help make the correct decision. In this shortish post I am not criticizing cat breeders. I am just discussing objectively and in a neutral way some important issues surrounding this cat breed.

The Scottish Fold resembles an owl. This is charming. The ears are flat to the head. The head is bred round to enhance the unusual appearance; a "stand out" appearance. Except for those oh so strange ears, the Scottish Fold is a blend of American and British Shorthair cats. Fairly normal conformation. Nothing extreme. Is there a trend back to the less extreme appearance? I think so.

The body shape is called "semi-cobby". In layperson language this means a little chunky or stocky compared to the average cat shape. The round eyes also enhance the owl like rounded appearance. All Scottish Fold kittens are born with straight (normal) ears. They start to flatten between 13-23 days of age. Not all kittens in a litter will develop folded ears as the mutant gene is dominant.

Yet we shouldn't forget that the central feature of this cat, the flat ears, are as a result of a genetic mutation that would, it could be argued, not be present in the wild (i.e. naturally) as it restricts survival in limiting hearing. Hearing and the sense of smell are very important in the cat and animal world. The mutation does not enhance survival, therefore. At a Darwinian level, this type of evolution would have died out, I suspect.

The author, Gloria Stephens, in her book, Legacy of the Cat, writes that there is a difference of opinion amongst some cat breeders as to the inheritance of the genetic problems (disease) associated with this cat breed. It is a little unsettling to read this as it infers that some breeders don't really have a handle on the negative aspects of this genetic mutation.

Although, when we look to adopt Scottish Fold kittens we should know these issues as it tells us that some breeders are going to be more concerned about the health issues associated with this genetic mutation. Sometimes the effects of genetic mutations that create an interesting appearance are not confined to the interesting appearance. There are secondary health issues. And this is the case with the Scottish Fold.

Some breeders say that Fold can be bred to Fold with no health problems. While others say that serious defects show up when the cat is 5 years of age or more, if this breeding method is adopted. These breeders say that the mutant gene affects the cartilage in other parts of the body causing an arthritic like condition in the feet and abnormal cartilage growth in the joints. The tail can become stiff too. In other words some cats might become crippled.

People looking to adopt/buy, call it what you like, Scottish Fold kittens, should know these issues. Maybe they should ask questions. There are moral as a well as practical issues involved. This is not a criticism, but should people be breeding cats that can, under certain circumstances, become prematurely unhealthy?

From Scottish Fold Kittens to some more on this cat's health