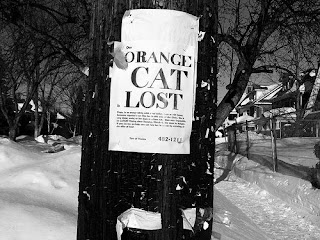 Losing a cat is an experience many people have gone through, even for indoor cats. Indoor cats can get out. Some indoor cats want to get out, while others place an invisible barrier in the way, even when the door is open and freedom beckons. Or they are simply happy where they are.

My mother has lost a cat on at least two occasions. What I mean by a lost cat, is one that has disappeared, and not a cat that has gone over the rainbow bridge.

I was prompted to think about this for two reasons. Firstly, I now have two stray cats that have decided to come into my home without any prompting and encouragement. One who I have called Timmy is an unaltered (unneutered) boy cat. Well, I am guessing that he is "whole" as he is jowly (a kind of thickening at the sides of the face). He comes in for food, a sleep and some TLC. I guess someone lost a cat or lost their cat for a part of the day. Maybe he has no home and is a complete stray but he is socialized so I believe that he comes from a person's home, at least originally.

Recently, a relatively small black cat (a moggie, as is Timmy) has found her (I think she is female but I haven't got close enough to confirm) way into the home. This cat has a collar but no name or number on it. She is hungry and it is cold outside. Someone is in the process of losing a cat. I can only guess the owners of these two cats are not that involved with their cats. They appear to be neglecting them; gradually pushing them away and eventually losing them.

I don't particularly want to pick up the pieces as I haven't the facilities and I have my own cat who may be put out by these other cats coming in. I owe her a quiet and undisturb 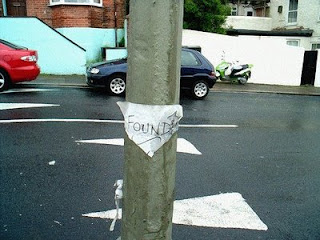 A story from America is another reason why I am posting about a lost cat. Some lost cats are going to be stolen, particularly the desirable purebreds. When Bengal cats were a novelty in the UK there was a spate of thefts (see Bengal Cats for Sale). This post concerns what seems to be a purebred Siamese cat (although often cats are not purebred, even though they have the appearance of a purebred). The cat is a Traditional Siamese cat. The cat is called Merlin and I presume he is an outdoor cat. (see cats indoors or out)

Essentially, it seems that the neighbors of Merlin's owner stole the cat. At least this had been alleged and their actions bear this out. They seem to have taken a fancy to Merlin. They took the cat, housed the cat and treated Merlin as their own with no intention of returning Merlin despite knowing who the owner was. OK, it looks like straight forward theft and lets remember the domestic cat is a "chattel" (an object, such as furniture) in the eyes of the law. See Cats and the Law.

The police were called out but in time honored fashion washed their hands of the matter. Why? Because the neighbors who had taken Merlin had expended their money on vets bills and had then placed a "lien" over the cat. This is allowed in the State concerned, namely Oregan.

A lien is a kind of mortgage. The neighbors who created the lien were saying that they should be allowed to possess the cat until the money expended on Merlin was reimbursed by Merlin's owner. This form of legal charge clearly scared the police into doing nothing as they declared the dispute a civil matter. Police like to do that as it gets rid of their problem very efficiently.

This meant protracted legal proceedings and legal costs. Fortunately, Merlin's owner found a generous lawyer (yes, there are some) who seems to be a cat and animal lover as he waived the majority of his charges.

The owner got Merlin back eventually. The whole matter could and should have been dealt with as a criminal matter. The police could have recovered the cat. The alleged thieves could then have sued in the civil courts to recover the money expended, if they wished. They would not have done this as their money was spent without the the cat owner's consent.

The police could then have sensibly dropped any idea of prosecuting the alleged offenders on the basis that is was not in the public's interest and the whole matter would have been resolved in about an hour. Sometimes a lost cat is a stolen cat but you'll be damn lucky to get any police force where ever you are to get them to do anything about it.

From Lost Cat to Cats and the Law

Lost Cat Photos: second down is by Whiteleaf. Both are published under creative commons: