I came across the subject of the Feline Herpes Virus again because I noticed that a number of cat breeders use a food supplement called L-lysine. I wondered what it was and what it did. Lysine is an amino acid. In fact, it is an essential amino acid, which means that humans cannot synthesize it. It is an important substance for humans because it is a necessary building block for proteins in the body. It may also provide a remedy for herpes simplex infections in humans.

Experienced cat keepers and breeders say it can control the Feline Herpes Virus. Users of one particular brand of Lysine, Duralactin Feline L-lysine, say that it is one of the best ways to control herpes, feline or human. One purchaser of this product, who looks after "special needs cats" suffering from herpes says that "when there is more lysine (and therefore a greater proportion of lysine compared to arginine), viral replication is suppressed and cytopathogenicity is inhibited" (forgive me for quoting you verbatim but it is in the cause of accuracy).

There are many manufacturers of lysine but this particular product (Duralactin Feline L-lysine) is apparently very attractive to cats. They love the taste of it; so no problem administering it. Caution should be exercised, however, as it contains milk protein and ordinary milk can cause diarrhea in cats.

A well known Bengal cat breeder simply buys lysine products made for humans such as capsules and crushes them with a spoon and sprinkles the powder on the cats' food.

The severity of the illness varies. The disease is transmitted by direct contact with the infected discharge from the eyes, nose and mouth and by contaminated litter trays, water bowls and a person's hands. 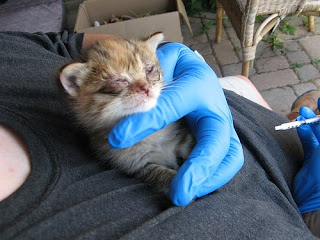 Symptoms begin about 2-17 days from exposure (as stated above). The symptoms reach a maximum about 10 days later. The first sign is severe sneezing. This lasts for 1-2 days. This is followed by conjunctivitis (eye infection) and a discharge from the eyes and nose indicating a cold. This is followed by a fever, apathy and a loss of appetite. The discharge becomes purulent (puss like). The cat breathes through the mouth.

At this point the virus could be the Calicivirus or Feline Herpes Virus. The symptoms of the herpes virus then follow this course: the cat develops a "spastic cough". Corneal ulceration may develop on the eye (see feline eye diseases). Secondary bacterial infection, dehydration, starvation and weight loss combined could then be fatal. Bacteria infections can cause conjunctivitis - see picture of cat with conjunctivitis.

In addition to the lysine mentioned above as a means to control the disease, cats should be isolated, rested and confined to a humidified room (using a home vaporizer). Eating and drinking should be encouraged. Eating a drinking again should ensure that the worst dangers are overcome.

Clearly a visit to the vet is needed who will probably administer antibiotics to control secondary infections. Cats that have suffered from the acute illness become carriers. Feline Herpes Virus lives in the lining of the throat. The virus is shed in the mouth when the cat's immune system fails to contain it due to stress. The cat may show signs of a mild URI at this time.

Apparently a vaccination is available. A veterinarian will advise on this.