- December 07, 2008
I bumped into this cat cruelty in California inadvertently. This is a particularly nasty case. A certain 24 year old Californian, Timothy Kooyman, has been in trouble before for animal cruelty.

On this occasion it is alleged that he set fire to a cat that then ran into the bush causing a brush fire. He poured gasoline over the cat and set the cat on fire. It it is true, it is a shame he didn't do it carelessly and set himself on fire at the same time.

He also allegedly mutilated 2 cats by cutting their tails off and breaking all their legs. They were found, alive, in his car in a plastic storage bin. They were euthanized, mercifully.

This person needs medical treatment if he did this (he has had medical treatment following an earlier animal abuse case apparently). Here is a picture of him. He looks depressed. He is ill but a very bad, indeed evil person if convicted. 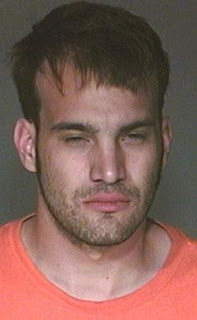 The maximum penalty on conviction in California for animal cruelty (as at the date of this post and to the best of my knowledge) is a $20,000 fine and one years imprisonment.

I am not sure about this but I think it is good to have a long hard look at the person who allegedly did this (lets remind us, though, that he is innocent until proven guilty, although the evidence against him is almost certain to result in conviction and he has already been convicted for animal cruelty in the past).

Cat Cruelty in California to Cats and the Law

Cat Cruelty in California -- Photo of Kooyman: I believe the person(s) or legal entity who have copyright to this picture have waived it. If I am wrong please advise ASAP by leaving a comment - thanks.
animal abuse animal law cat cruelty