This is a classic stand-off between a resident cat, the orange cat that you see in the video, and an invading cat which is the grey-and-white cat. The resident cat wins the stand-off. It's entirely classic and normal and the intention is to avoid a fight which would harm both of them. Common sense dictates that they don't want to be harmed if it can be avoided.

Note: This is a video from another website. Sometimes they are deleted at source which stops them working on this site. If that has happened, I apologise but I have no control over it.

You can hear this strange yowling sound which has bemused people in the past but thanks to the Internet it is now understood. It's just a close-range sound to intimidate the other. You'll note that the ears are pulled back slightly. They are not pulled all the way back to fully protect them. I think this is because they probably both knew that they were not going to physically fight because of the fact that they've met before under similar circumstances and know the outcome.

ASSOCIATED: Do domestic cats fight to the death?

The video was made in the town of Gudauta in the Republic of Abkhazia, Georgia. She must have sent the video into the Daily Mail newspaper who pay for videos. It was made by student Salima Sanguliya, 20, who is the caregiver of the ginger cat, Simon.

She gets very close to the cats at one time which I think was unwise because there was lots of aggression on display and one of them might have redirected it against her. 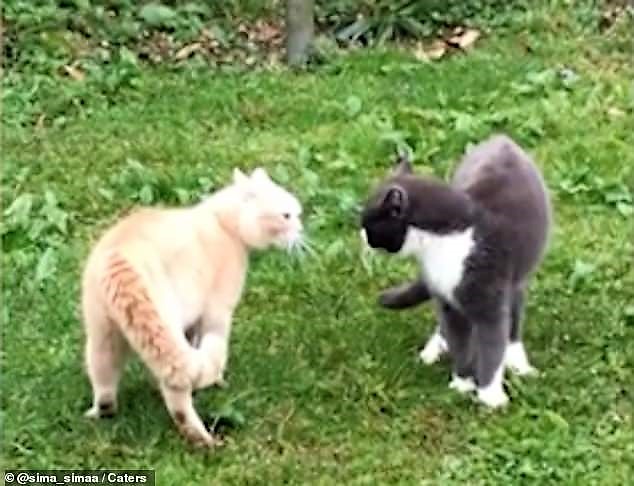