What type of skeleton does a cat have?

All cats have an axial skeleton which consists of a skull, spine, ribs and sternum. Humans also have an axial skeleton. It serves to protect the central nervous system and the organs in the ventral body cavity. The structure of the domestic cat's skeleton is almost identical to that of the big cats with respect to shape and proportion. The only real difference is the size between domestic cats and the big cats.

When the domestic cat walks the shoulder blades rise above the spine just as they do with the lion or tiger. The cat's many vertebrae provide 'highly visible flexibility' in the words of Dr. Bruce Fogle.

If things go wrong with the skeleton, it is not caused by design because its design is one of evolution's superb achievements. Disease or hormonal and dietary upsets can cause arthritis, for example, but not nature's design.

ASSOCIATED: Cat anatomy quiz! AND Cat skeleton in some detail

Natural selection resulted in this beautiful structure. It is said that artificial selection (selective breeding) in the cat fancy, particularly with respect to cat breeds such as the flat-faced Persian, has led to anatomical deficiencies because the skeleton has been distorted (cranium or skull) for the sake of appearance to the point where it affects health such as difficulty breathing and tear duct overflow in the Persian. 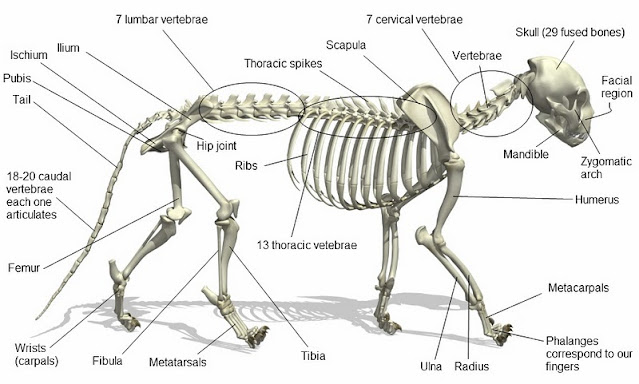