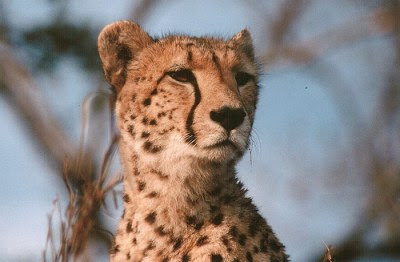 This is not an Asian cheetah as I couldn't find one on Flickr (not surprising since they are all but extinct in the world). This is a fine cheetah nonetheless - photograph copyright by World Resources Institute Staff - taken by Jonathan Talbot in South Africa.

The Asian cheetah is also called the Asiatic cheetah. Not that this will matter before long as this beautiful wild cat is almost extinct.

There are about 50-60 remaining in the wild in central Iran (I wonder if the war down there has had an effect?). Another survey indicates 70-100 survive. The cheetah already has a high level of inbreeding due to a drastic reduction in population about 10,000 years ago, during the ice age. Is such a small wild population viable? I can't find the answer quickly but I would have thought that 50 is a number at which population viability is at the limit. The species is critically endangered therefore.

The Asian cheetah is extinct in India. Like the cheetah found in Africa the Asiatic cheetah preys on antelope and other small/medium sized animals. Although I don't believe the antelope exists in Iran. In Iran a more readily available prey is the Jebeer gazelle and Goitered.

Since the Iranian revolution of 1979 when the Shah was overthrown and the Imams took control, the decline in the Asian cheetah has been accelerated. You would have thought the opposite would have been the case but sadly no. It looks like religion no only kills people.

This decline has been brought about by the destruction of (a) habitat (b) the prey the cheetah hunts and (c) the cheetah herself. Little or no consideration has been given to conservation efforts in Iran. It is a great shame that the cheetah finds herself in a country, Iran, and a continent, Africa that are to be truthful not that well suited to wildlife conservation as at 2009. That is particularly true now, in 2009, in Iran where there is political turmoil and a dictatorship. That said some (I think too little and certainly far too late) efforts are now being made.

"Degradation" of the habitat was accelerated during the period 1988-1991. The killing of wildlife that the Asian cheetah lives on also accelerated at this time, apparently. This is probably due to the difficulty in surviving for people in Iran. Or it is just plain hunting for pleasure. I've been to Iran during the time of the Shah (1971) and it seemed a reasonably prosperous country in those days. Quite westernized and cultured. It probably still is (cultured but no longer westernized). This would indicate hunting for pleasure is the problem.

Accessibility to the Asian cheetah habitat has been made easier because of road building for mining in the area of cheetah habitat. Also the cheetah habitat is in the region where smugglers pass from Afghanistan and Pakistan - more opportunity for hunting, which is uncontrolled.

Local herdsmen also kill the Asian cheetah because they think that the cheetah kills their livestock when in fact it is often other animals. Apparently some form of training is taking place to help herdsmen distinguish between the animals. I can't imagine how effective that is - probably extremely low grade and ineffective (wrong - please tell me).

India, having driven the Asian cheetah to extinction now want to clone the animal to reintroduce her. Same old story. Why do people do this? Everything is too late; the moment has passed. Why is it so reactionary and not proactive? Answer: people acting in short term self interest and a total lack of co-ordination.