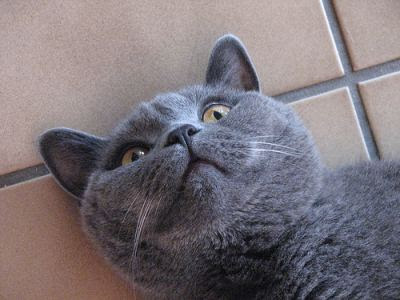 Cat on Drugs - yes but it's catnip a natural "drug" - photo copyright Woolve.com(new window). This is a British Shorthair cat I would say. And he's called Virgil. Virgil just got spaced out on catnip. Cool man cool, let's chill out man.....Catnip works by pleasantly stimulating a cat's pheromonic receptors. Pheromones also affect the behavior of people (sexual arousal etc.). Catnip is the common name for Nepeta a genus of flowering plants found in Europe, Asia and the Meditteranean regions (and other areas).

Is it right to put cats on drugs? (I mean man made drugs). I'm talking here of drugs to alter behavior in an otherwise healthy cat. A lot of people are on drugs and there are some who think that too many drugs are dispensed. It's a kind of quick fix. Prozac is the classic. If you want to feel better (and nearly all of us do!) take some Prozac. But it is not as easy as that, is it?

With people we can at least ask the person how they feel and generally obtain an accurate diagnosis. After all for behavioral issues (i.e. the person or cat is healthy physically) you really have to interview the person or cat :) to get to the bottom of the reason for the so called behavioral problems.

We also have to ask if the behavior of our cat is abnormal. It may look abnormal to us and it may cause us problems. In other words it may disrupt our lives and take time to manage. But is it abnormal from the point of view of a cat? Cats are reactive and they act naturally.

It may be that your cat has become aggressive towards a new cat. I don't think that could be called abnormal and, if not, is it right to administer a drug like Prozac to calm her down? What is happening here is that we are calming her down to suit us. We are trying to change the character of the cat. It is a bit like declawing. We want a cat but on our terms so really we don't quite want a cat but a modified cat. A kind of human-cat-robot.

Examples of when a cat's behavior can become difficult are: Post Traumatic Stress Disorder (PTSD), nervous travelers, anxiety causing poor litter habits, introducing a new cat into the family. For dogs it seems that some can naturally have reactive dominant male issues. This is normal and requires training and the person to be the dominant animal in the pack. A lot of bad dog behavior is due to the person who keeps the dog not demonstrating enough dominance (i.e. being the pack leader) and the dog takes over. It would be wrong probably (unless it is the last resort) to give a drug to the dog under these circumstances. Apparently the answers are in a book called "Control Unleashed" by Leslie McDevitt.

As to PTSD this is (as far as I am concerned) a dramatic and sudden retraining/reconditioning of the brain due to a sudden traumatic event. It can be very hard to train it out so I think drugs are useful under these circumstances. They give a chance for time to heal. Provided we know our cat is suffering from PTSD (and I don't know how you diagnose that in a cat), I think drugs like Prozac or Xanax can help (obviously with great care and on a veterinarian's advice). There are occasions when cats on drugs is OK.

Cats on drugs is probably OK and even sensible when you need to give some sort of tranquillizer if your cat is traveling. As long as it is only for that purpose I think it makes sense. My cat is nervous and the best solution is not to travel! Or be with her as much as possible which I am able to do. Not everyone can though. As alternative to hard drugs is for example Rescue Remedy, which works for humans and cats (I believe).

It is very unwise for anyone other than a vet to give any drugs to a cat particularly dugs that we consider very common place and safe such as aspirin. Aspirin can be fatal to a cat for example. Tylenol can also be fatal. There are many others.

The bottom line is that we have to ask ourselves if we are altering natural behavior to suite ourselves. And if not whether we can train the problem out (if it is a problem for the cat). Cats on drugs should be a last resort I think.

Update: this is a message from a fellow blogger, which adds to this discussion:-

I found you page about catnip, and I have a different take on this. I'm a biology prof, btw! I don't think that response to catnip has to do with pheromones. I haven't detailed this yet in a post, but if the vomeralnasal organ is removed (it is responsible for pheromone responses) then cats still respond to catnip.

My theory is that cats use catnip as a natural insect repellent.