- June 20, 2008
The health of cat breeds and in this instance Maine Coon Cat Health is important to people. In fact it is often one of the most important aspects of a cat breed. It must be and it should be. The welfare of cats should be our primary concern. 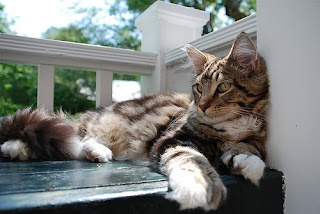 This Maine Coon cat ("Hugo") is not ill as far as I am aware. He is here because it is a nice picture (copyright stevegarfield) and is reproduced under a creative commons license.

The Maine Coon is a fine looking cat with a long American history. This cat is large and looks robust. This is not surprising, after all, as their origins are in the barns of Maine, USA, as a semi-feral mouser cat. You've got to be pretty tough to live like that.

One difficulty in discussing cat health problems is to make sure that the problem is breed specific. Some conditions are found in all domestic cats. But if that is the case sometimes a particular cat breed has a predisposition to a disease (i.e. it is found more often in a certain cat breed because the disease is genetically inherited).

These are the diseases that are known to be found more commonly in the Maine Coon cat than in other breeds - Maine Coon Cat Health problems. Note: Maine Coon breeders are aware of the need to manage and eliminate these diseases through screening and wise breeding so this post should not frighten anyone off from adopting a Maine Coon cat.

The word "dysplasia" means an abnormal development or growth of organs, cells or tissue in the body.

In this instance the growth occurs in the hip with bone tissue being replaced by fibrous tissue. This is because the hip joint is ill fitting causing wear. Cartilage is produced to repair the joint. The disorder is both inherited and caused by environmental factors. If severe it causes painful arthritis and is crippling. (Wikipedia says it also affects the Siamese cat - link to Siamese cat health problems).

Patellar luxation is sometimes found in Maine Coons and can "occur concurrently to hip dysplasia"). The knee cap slides to the inside of the leg. Can cause lameness and reluctance to jump (source: Medical, Genetic & Behavioral Aspects of Purebred Cats).

This stands for Hypertrophic cardiomyopathy. It is an inherited disease. This means that the cat in question (not all cats in a breed) is programmed genetically to acquire the disease. HCM is late onset (adult onset - becoming noticed when the cat is an adult) meaning that it is not congenital (symptoms present at birth). HCM is the most common heart disease reported in domestic cats. It is known to be present in the Maine Coon cat breed. About one third test positive apparently. This seems a high percentage.

I have a friend Valley Girl who cares for a wonderful polydactyl Maine Coon. Maine Coons have a predisposition to be polydactyl as well but this is not a health problem. She has contacts in the Maine Coon world! And she reports what seems like a high percentage of Maine Coons dying young of HCM and one dying of hip dysplasia complications. I don't wish to harp on about genetic illnesses but I have always kept moggies and it has never entered my head that my cats might die, at say aged four, of a heart disease. I find the high percentage worrying. I don't know how other people feel but a poll on my site indicates that people are concerned about a cat's underlying health. On that basis inherited diseases damage the reputation of a cat breed and the MC is a very popular cat.

The symptoms are a thickening of the left thickening of the left ventricular free wall & interventricular septum. As it affects the Bengal cat as well I have made several posts about this disease in relation to the Bengal cat:
A cat will be suspected to have HCM when a heart murmur is present. Cardiac ultrasound is used to confirm the presence of this disease. As stated, the development of HCM starts in adulthood, which could mean early adulthood (8-12 months) or much later at say 8 -12 years. Screening should take place every year of adulthood therefore. Breeders regularly screen and remove cats from the breeding program that test positive.

But not all breeders do screen as far as I am aware, which is a shame as it means they perpetuate the disease in their breeding lines (this may apply more to Bengal cat breeders who are just coming to terms with the fact that their cats may contract HCM). It also means they may pass on the disease to other breeders if they loan or sell their stud to another breeder.

In Maine Coons substantial research has been carried out (I believe) and as a result the gene involved is known to be autosomal (not sex related - a gene located on a chromosome that is not a sex chromosome) dominant with variable penetrance. On the following page is an abstract of some research carried out on the Prevalence of HCM in Swedish Maine Coon cats that were asymptomatic. It is reproduced under a creative commons license fully complied with to the best of my knowledge. 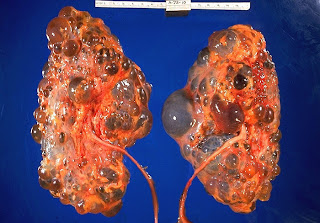 This stands for Polycystic Kidney Disease. It is a Maine Coon Cat Health problem. It is present in Persian cats as well amongst other breeds. It also occurs in humans. This is also a genetically inherited disease.

Cysts form in both kidneys (see photo above). Kidney function is impaired and it deteriorates with renal disease at aged 3-10 years. The gene responsible is autosomal dominant. The symptoms are weight loss, depression, occasional vomiting and increased thirst and urination. PKD cats need not be euthanized unless deemed necessary, but it is a fatal disease.

This disease affects any cat but is mentioned in relation to the Maine Coon so is probably more commonly present in this cat breed (i.e. a genetic predisposition). Symptoms are swollen gums that bleed. This causes discomfort and loss of appetite.


The symptom of this disease is the death of neurons in the spinal cord. These neurons control muscle function. Accordingly, the muscles fail to work properly and muscle weakness ensues resulting in a non normal gait and a less athletic cat (cats are usually very athletic). The cat's life is impaired but it is not fatal (it seems).

It is transmitted by an autosomal recessive gene. It has been transmitted widely. Breeders can now test for this disease.

The Maine Coon has more than the usual genetic predispositions to certain diseases from my research or at least this is the impression that I have. This may be due to careless breeding early on in the breeding program (i.e. many decades ago). It would seem that modern breeders are more in tune with the need to control and manage these diseases - I hope so.

One last point. A concerned Italian breeder is worried that enough is not being done in Europe to eradicate HCM from the breed. He emailed me. This is his email: Maine Coon Cat Health in Europe.