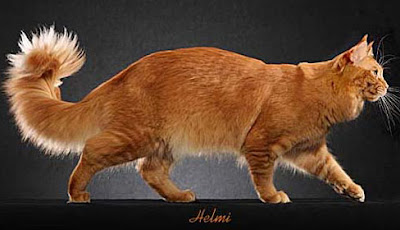 I dedicate this short post to a cat only a few people knew in his short life. He caught a killer infection apparently and died only weeks old some times in late 2007. Here is his picture: 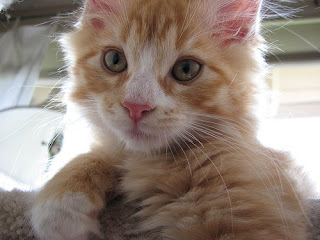 Photo copyright Great Beyond (published under creative commons). His name was Skyfire. He is 5 months old in this photo. He had an estimated 3 weeks to live. He stopped eating shortly after this photo was taken. His coat looks like a red mackerel tabby and white or a red classic tabby and white. As it is faint it may be due to being a kitten or be cameo (silver). We'll meet you over the rainbow bridge one day and love you again.

The red or orange color (orange is a more accurate description I think but cat fanciers call orange, red), is the result of the actions of the O orange gene, which is sex linked. The O gene is carried on the X chromosome. Females have 2 X chromsomes and males have one X chromsome. Females therefore can carry 2 O genes, which results in the cat being red.

The O gene makes cats red as it converts the black pigment, which is called eumelanin, to phaeomelanin and orange pigment giving us an Orange Maine Coon cat. 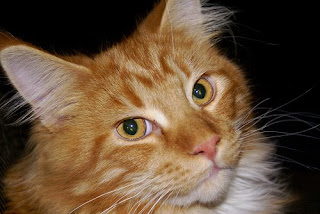 Red classic or mackerel (can't see the body or perhaps an expert can tell by the face) tabby Maine Coon cat and white. Photo copyright Vironevaeh.

Anonymous said…
I'm sorry about Skyfire. My kitty, Balder, looks kinda like him:

Anonymous said…
He is so sweet. I had a cat for 16 years who just passed away last week. I was devastated and am very heart-broken. That cat was everything to me. She was so smart, always gentle and always a good girl. I miss her. She looks like your little one, orange and white with the most beautiful symetrical markings. She was perfect and knew it too.
19 July 2009 at 11:39

Anonymous said…
I'm so sorry you lost your cat I have a maine coon who looked just like that as a kitten he is two now,but he is sick, I hope you get a chance to get another one, they are awesome cats..
28 December 2009 at 21:08

Anonymous said…
My cat looks like the last red one. with the tabby markings. He is purebred, so why would you question that? He has been my man now for going on 13 years. He was diabetic and I did feed dry food. He now takes veterinarian food DM for diabetic cats.. he was losing weight but gained it back. He is gorgeous, and I have another she is patched in browns, tans and reds. beautiful girl I love them all. midge
7 August 2010 at 20:05

Anonymous said…
My cat looks a lot like the last red one too, but his fire is a little shorter because i live in Hawaii.
7 January 2014 at 00:57

Unknown said…
mines is the 1 in the middle mind you her eyes are the same color of her fur orange she's my doll shes well mannered lovale and loves to eat
14 March 2014 at 20:22