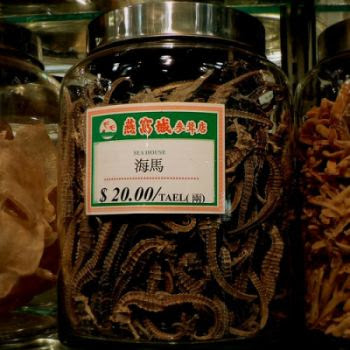 Endangered seahorses (protected by CITES - but not actually protected by the look of it) on sale at a Chinese medicine shop - photo frozenchipmunk (published under a creative commons license). An example of how Ancient Chinese Medicine is having a negative impact on the preservation of endangered wildlife.

Chinese Medicine as far as I am concerned should be either better regulated or modernized. I don't have much hope that this will happen in China or other eastern countries such as Vietnam, who have similar medical ideas. But it could be regulated in the UK. As long as the UK government allow Chinese doctors or medical staff to operate in this country they condone the poaching of precious wildlife it seems to me.

Ancient Chinese Medicine, is what it says on the packet - ancient and the world has moved on substantially while this medicine is practiced at the expense of many wild animals.

The Chinese are probably justifiably very proud of their ancient traditions. Such an ancient civilization. But I know that China wants to be more modern. But the government is still living in the past in respect of its medicine. It is not satisfactory to base medicine around animal parts in the modern world. It was fine hundreds and thousands of years ago but not now, please.

Ancient Chinese medicine is one of the main (perhaps the major cause) causes of poaching of rare wildlife such as the Tiger. The Rhino is another. Chinese doctors think that the Rhino horn can make an impotent man potent -sad really. I would suggest that the person buys some Viagra as this is known to help and it doesn't need animal parts to make it. Maybe that would stop them buying Rhino horn "medicine" and save some Rhinos. It would be nice to learn that the Chinese government had enacted regulations to deal with this. I am sure that some Chinese doctors don't believe in this medicine. 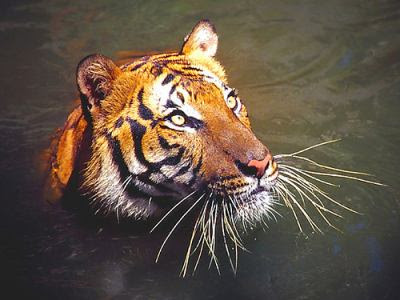 The incredibly endangered Tiger. Photo copyright B cool published under a creative commons license. Tiger parts are used in Ancient Chinese Medicine. We should remember that when and if we next buy Chinese medicine.

I am not mad about the medicine per se but for the damage it does to vulnerable and rare and fine animals such as the Tiger.

What prompted me to make this post was a story about the Vietnamese police arresting some people who had 2 Tigers in a freezer. They were trading in Tiger parts. It was not clear where the Tigers came from, maybe India where the Tiger population is in a catastrophic decline and where the Tiger is heading for extinction as the Cheetah already has in Pakistan. The Tigers were in transit apparently.

Of course India has conservation problems too. The reason why the Tiger is being poached to extinction in India (the main remaining habitat of the Tiger incidentally) is because of a lack of will to enforce the preservation of this fine animal. When the tiger is gone we will bemoan the loss but we cannot manage, it seems, to do things in a proactive manner to protect this species.

Vietnam's record on animal rights is hardly anything to shout about. Like the Chinese some of them kill and eat domestic cats and also like the Chinese they harvest bile from captive wild bears to supply the medicine market. Some Vietnamese as do some Chinese think that a bear's bile can do you some good. They cage them in tiny cages causing untold agony as a result. This is barbaric and cruel, I'm sorry.

Ancient Chinese Medicine has some upgrading to do and the fact that it is ancient is not a reason to preserve it in its current state. It is no recommendation that it is ancient. It should be a criticism at this time.

People in the West should consider not buying medicine from a Chinese outlet. If we do we are very indirectly killing Tigers and hurting bears and other endangered species of wild animal.

Sorry to be so critical but I am speaking on behalf of the silent animals.