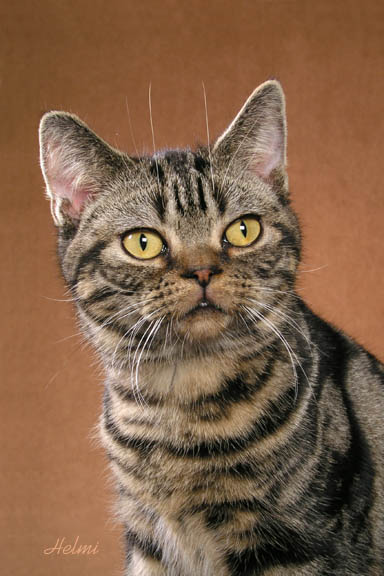 Above -- American shorthair tabby cat - a pure and wholly normal cat. The cat illustrated has a classic tabby coloring and pattern, the blotched tabby pattern with the very distinct tabby "M" on the forehead - photo strictly copyright Helmi Flick.

The American shorthair tabby is, for me, the best coat color and pattern for this most normal and balanced of American cats. But is she American? The origins of this cat breed is in England so it is fair to argue that this is an English cat, the English Shorthair.

Yet, as the first of this breed came over to America in the early 1600s I think the English can concede that by now an American shorthair tabby is an American cat.

The tabby pattern is the most natural of all cat patterns and colors because it has evolved naturally as the best in terms of camouflage and in the early days before domestic cats became wild cats (about 9,000 years ago) it was all about survival in a natural environment. And the landscape is often brown and broken in color and texture.


I have made an extensive post about the tabby cat coat under the heading cat coats tabby. In summary, each hair is not a single color but has a horizontal banding of black and yellow. The black color is made up a substance (a pigment) called eumelanin and the yellow color is made up of a pigment called phaeomelanin. The gene that dictates how this coloring is deposited in the hair as it grows is the Agouti gene (symbolized by the letter A - a dominant gene). The tip of the hair is black.

In the American shorthair tabby, the Agouti gene works in conjunction with another gene (a tabby gene) which is recessive and which is symbolized by the lower case letters, mc. The presence of this gene results in eliminating the black to yellow banding on certain hairs and allowing only the production of black pigmentation, which is present throughout the length of the hair. This happens in a clump of hairs and in a blotched tabby, as shown above, the clumps form swirls and blotches throughout the torso. In a mackerel tabby (named after the fish's strips) the patterns are striped 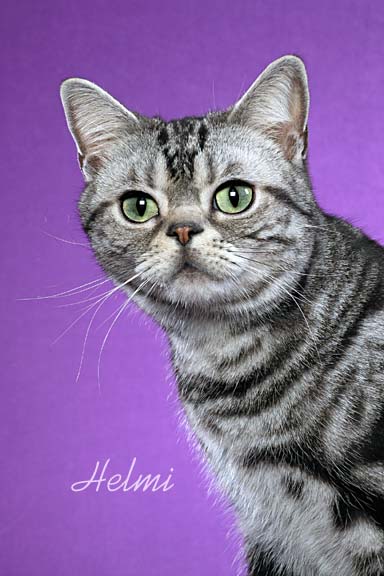 Above -- Silver Classic American Shorthair tabby cat - photo strictly copyright Helmi Flick. The silver tabby lacks the yellow pigmentation causing the yellow banding referred to above. Without this pigmentation the black stands out more producing a high contrast pattern, something that breeder aim for generally in patterns. If some yellow pigment remains it is called "tarnishing " in the cat fancy. This color is produced by a dominant gene called the inhibitor gene, symbolized by the letter I. It retrains and subdues the development of the pigment during hair growth.