Of course, Gordon Ramsay has a very high hitting Instagram account with over 13 million subscribers. And he has a son called Oscar. And the family also has what appears to me to be a pointed Exotic Shorthair cat. A very good looking cat although bred to extreme. The Daily Mail has picked up on the photograph and said how adorable it is as Oscar who is two years of age goes for a 'walk' with the cat. Well, they are joking of course because Oscar is carrying the cat and here is the point of this article.

Oscar is carrying this purebred cat in a very bad way. It's the kind of way that children do carry cats. Every time they do it it is incorrect. It's common sense that it is incorrect. You don't need a sophisticated argument from a cat behaviourist to tell you. 😉.

When you carry a cat you have to support them properly and not have them hanging from their shoulders putting strain on their spine. I've got a nice graphic prepared by Ruth which shows you how to pick up a domestic cat. 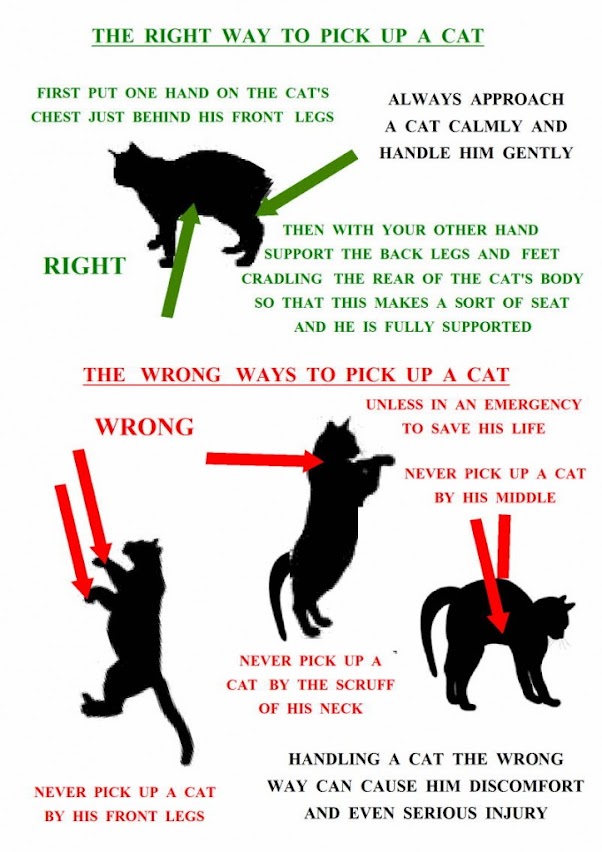 If you want to pick up and hold your cat, the only way to do it is to place your hand under the cat's chest while they are standing on the ground, and you lift her up while at the same time you place your other hand under her bottom so that she is fully supported.

Then as you lift up your cat to the vertical position you continue to support her bottom with your other hand and arm while also supporting the upper part of her body (under the shoulders) with the other hand.

Essentially there needs to be two support points on a cat: the upper part of the body and more importantly the entire weight should be supported under the cat, under the bottom.

Sometimes you simply want to lift up a cat in the horizontal position with both hands and place the cat on a table or whatever. That's different. In the first description I'm describing how to pick up a cat and carry a cat in an intimate way as opposed to a functional way.

You don't carry a domestic cat as if you are carrying a baby which is belly-up and cradled. And you certainly don't do what Oscar is doing.

He just needs to be taught because he doesn't know better. There is certainly a responsibility on cat owning parents to both teach their children how to interact with the domestic cat and secondly to supervise until they are confident their child can interact properly. This should be a proper parent-to-child training session with practice.

It's important both for the cat's health and welfare and also from the standpoint of the child because if a cat is mishandled they can strike out. A child might become scratched. The parents then don't like the cat. They relinquish their cat to a local shelter. That's how it can play out.

I don't want to be a wet blanket but I don't see it as that amusing to be honest. I just see a need for Gordon Ramsay or his partner to do a bit of research, such as read this article, and teach their son (who looks like Gordon) how to lift and carry a domestic cat.

My advice would be: don't try it until you are a bit older. To be honest Oscar is probably too young to be carrying a cat of this size. The cat is about half his size. This is quite a well fed, plump Exotic Shorthair. Although, I don't think that he or she is obese. Just well looked after except for the technique in carrying her 😊.