Large Cats of North America must embrace both domestic and wild cats. Of the domestic cats there is one "stand-out" large domestic cat. Individual Maine Coon cats can reach 25 lbs (11 kg). Although 7.3 kilograms (16 lbs) is about the average. If you've got a story about a large Maine Coon you might like to share it by making a comment. The figure of 25 lbs though is very much exceptional. Most large Maine Coon Cats weight about 20 lbs. Even this figure puts this domestic cat in the middle rank for size of the world's wildcats. A lot of the wildcats are quite small and of a size very similar to domestic cats today. 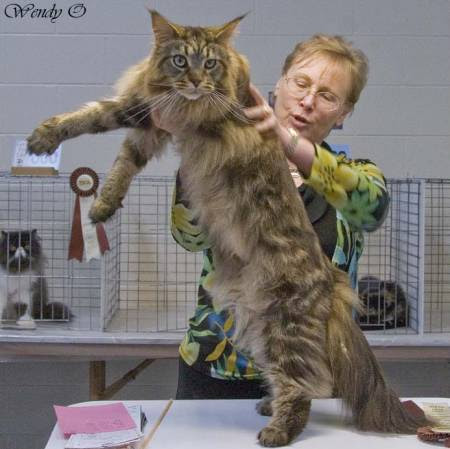 So, what about the wildcats of North America? The Cougar is the largest of the North American Wildcats weighing in at about 200 lbs for males. Cougars are also called Panthers, Mountain Lions and Pumas. The name comes from a Native Indina word " meaning "False Deer", apparently. The largest North American wildcat is then ten times larger than the largest domestic cat from the same region. I think this is more to do with practicalities than anything scientifically significant.

The most common North American wildcat is the American Bobcat. This cat has a size and weight a little larger than the biggest North American domestic cat at 13.3 kg (29.3 lbs). However, if you include tamed wildcats as domestic cats (such as the Serval an African cat) this wouldn't be the case, obviously.

Another wildcat from the region is the Canada Lynx. She lives in the woodlands of Canada and Alaska and weighs about 23 lbs on average (10.4 kg). This is not really a large wildcat but nonetheless might qualify as one of the large cats of North America.

A full list of wildcats said to be found in the USA is as follows: