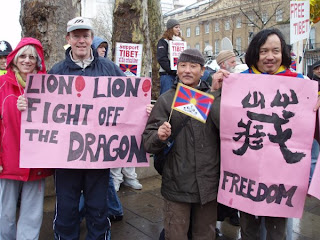 the thousands to clean up streets in preparation for the Olympic games that should never have been awarded to them as it will make them stronger and more able to project to the world the misleading idea that the country is modern and democratic. They made promises to clean up their act in relation to human rights issues and have not.

The Chinese government is still stamping on decent people who criticize them. The government of China is little more than a dictatorship.

Anyway I went to the demonstrations in London yesterday in support of Tibet. There were demonstrations along the route of the torch bearers from Wembley Stadium to the Dome (Canary Wharf area). My partner and I positioned ourselves outside No 10 Downing Street. The crowd of demonstrators was very big indeed. The chanting was good. I became hoarse and I took some photographs which can be seen on this post. I could not see the torch bearer as she was surrounded by Chinese security guards and the police. Who are these Chinese guards? What do the police think about them doing their job? Lord Coe called them thugs. It looks like the Chinese government pulled some strings. England is falling into line for the sake of commerce. Shame on the British government. Big business runs the world, we know that. The police were out in great force and were nervous and at times behaved brutally in suppressing the one or two brave souls who jumped over the fence to protest on the road. There were about 30 arrests in all. The entire torch bearing procession was spoiled by the demonstrations. Why is this a good thing? Human rights are much bigger than the Olympics and the Chinese government must be stopped.

I was their for the cats and the humans equally. I shouted for the Tibetans and in my heart I shouted for the many domestic cats in China being treated so horribly. Cat and Animal Cruelty definitely go together. Cat and Animal Cruelty is not confined to parts of China and there are obviously many Chinese who treat cats beautifully. It is the government that is at fault and some Chinese people who like to eat cats.

Photos: by the author. I am in the picture second down in the blue carrying a banner.