- April 13, 2008
Black Persian Cat - The cat immediately below is a young male Smoke Black Ultra Persian Cat photographed by Helmi at a CFA cat show. Photograph copyright Helmi Flick. Helmi calls the photo "High Fives". I love the way Ken (the cat wrangler) gets the cats into such great action poses which are captured so well by Helmi. This cat was three months old at the time of this photograph. He was one of Helmi's favourites at the cat show that day.
In a "smoke" cat coat, the bottom one eight of each hair strand is a creamy white or white. This part of the fur becomes visible when the cat moves as in the picture above. The remainder of the hair is a solid color, in this case black.
This effect is not caused by the Agouti gene but an inhibitor gene (I guess it inhibits the spread of the black pigmentation throughout the hair strand). A Black Persian Cat is, in my experience of searching for photographs of cats, quite a rare cat.
Here is straight black Persian by Helmi Flick again. This is an ultra-Persian or extreme bred. 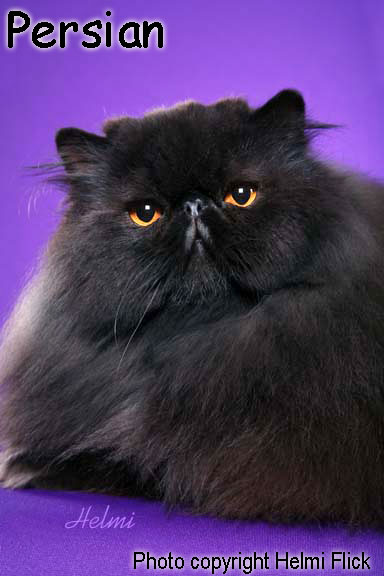 Black is certainly one of the rarer coat types for a Persian cat. Yet for the humble Moggie black and variations on it, is very common. Other than pure black the Tuxedo comes to mind.
When I say traditional Persian, I mean the more normal facial conformation and not the squashed faced cat which is sometimes called an Ultra Persian. The header picture by Helmi Flick is of an Ultra Persian. You can read about how cats become black cat by clicking on this link. One purebred cat that has to be black is the Bombay. This cat is selectively bred to be a shimmering black like a Panther.
She is one a group of purebred cats that are designed to look like wild cats.
There is a lot of history behind the black cat. Some people consider them unlucky, some lucky and some in-between, basically there is a mass of superstition in relation to black cats. Despite being unlucky for some, black cats may also be able to help us understand more about how cells in our body defend themselves from infection.
The tabby (particularly brown tabby) cat is the most common cat coat color and pattern. You can see some great tabby cats by clicking on this link and see all the cat coat colors as well with summarizes descriptions as to how the coats come about.
Persians like to sit and watch. I love the expression on his face. The brown tabby is the most common because it is the most successful as it affords the cat the greatest protection in terms of camouflage. Cat coats evolve pursuant to Darwinian principles. A successful UK wildcat that has survived against the odds and that has a brown tabby coat is the Scottish Wildcat. The American equivalent is the American Bobcat. So why do some cats have black coats? Why did black coats evolve at all? The Black Panther (a melanistic Jaguar) wild cat comes to mind.
Research carried out in America (at the National Cancer Institute and University of Maryland) indicates that the gene that produces black fur (or more accurately the pigmentation in the fur) also plays a role in boosting genetic resistance to diseases. The main function of the gene in Jaguars is to regulate what passes through the membrane of the cells of the body. The gene is one of a group of genes called 7-transmembrane receptors. In regulating what can get into a cell the gene is able to help improve resistance to viruses that need to enter cells to survive.
The argument is that the black fur gene has evolved because it serves more than one purpose, one at least of which improves the cat's chance of survival. It could also be argued that black fur increases the chances of survival as well as cats commonly hunt at dusk and at night and obviously black makes them less visible. Cats have developed specialist eyesight to see better in the dark. Persian cats are well known for their long fur.
Some might argue that it is too long sometimes as it needs regular grooming by the human keeper and the cat should stay indoors to prevent the coat picking up dirt and other objects. The gene that produces this, sometimes exceptionally long, fur is called the Long hair gene (strange that :-). In the dominant form (L) it is produces short hair and in the recessive (l) form it codes for long hair. In long haired cats the recessive gene delays the time at which hair growth stops. Apparently the technical term for hair growth is anagen. Sources: Black Persian Cat to Pictures of Persian Cats
cat breeds Persian cat