Cat Breed info - Photo copyright tanakawho - this is a mixed breed cat so not a cat breed.

I think that some of the most objective information can be found on the Pictures of cats.org website. I also think that people are searching for both written and photographic information. Of these two the image is probably the more popular. The image of a cat doing silly things is the most popular of all. But the silly cat website is more of a fad and will have its day. It is a fashion. And fashioins change.

The parent website to this subdomain is called Pictures of Cats, yes, but it is ultimately a serious website. There are too many serious issues to deal with worldwide in relation to cats and their welfare to be diverted for too long on the silly stuff. 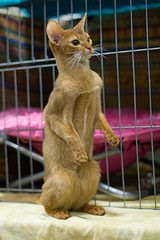 don at which their will be protests about China's human rights abuses in Tibet; a very important and serious subject. I will be protesting both on behalf of the Tibetans and the cats that are being slaughtered by the authorities in Beijing and other towns involved in the Olympics. I have already made a couple of posts about this. I treat cats as equals to humans. It could be argued that cats are superior. Humans are certainly not superior to other animals. Being more intelligent does not qualify for superiority. It makes humans able to dominate and survive better but in a truly moral world all living creatures are equal.

What kind of cat breed info can be found on this site and the main site? Well firstly, I have listed as near as possible all the domestic cat breeds alphabetically and photographically over three pages, the first three pages of the site. These pages can be accessed from the navigation bars of this website and the main site. The links are on the top of the navigation bar.

If you don't want to use the navbar use these links:-
Cat Breeds A-H
Cat Breeds J-P
Cat Breeds R-T
The list of cat breeds on these pages have links to probably the best pictures of cats thanks mainly to Helmi Flick and Dani Rozeboom (Maine Coon and Himmies). There are carefully and objectively summarized facts about the cat breeds.

Cat breed info is found on cat breeders' websites or cat association websites. Both, quite correctly have an axe to grind, an interest to serve. What those websites say about the cat breeds will often (but not always) maximize the good aspects of the breed. We accept that and exp 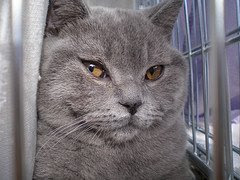 ect it. Other sites where information can be found about the cat breeds such as Wikipedia are good too but the articles are often written by cat breeders or people in the cat fancy. These articles are often very good but once again there is a tendency to be less than totally objective sometimes.

Cat breed info should include both the good (and there is naturally a lot of good) and the bad. The bad usually takes the form of heath issues brought about in part at least by sloppy early breeding practices in the development of the breed in question. What happens is that cat breeders try very hard to develop through selective breeding a cat that perfectly matches the appearance expected by the breed standard. In that quest they sometimes go too far and overstep the mark. This can be done as the breed standards are drafted in loose terms allowing discretion. This can lead to cats with an interestin 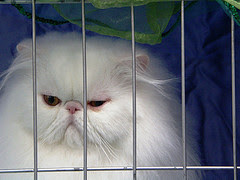 g but extreme appearance. This catches the eye and wins shows but there can be accompanying health issues.

Also in breeding for the perfect type the breeders eye be taken off the ball in respect of health. There are one or two or more cases where this has happened. The far to high incidence of heart disease in purebred cats such as the Maine Coon and Siberian (and now Bengal) is due to the introduction of a cat early on with a genetic predisposition to HCM. That said breeders will argue that the incidence is no higher than in the general cat population. This is incorrect in my opionion.

I try to be highly obejctive myself in writing about cats as I have no axe to grind. I just seek the facts and if they do not promote the cat breed in question so be it. In the long term the truth will strengthen the cat breeding business and the cat fancy generally. The short term view erodes the business and can collapse it. Look at banking. Greedy financiers distabilize the financial markets at the public's expense. These financiers are taking short term views to make quick money disregarding other factors. 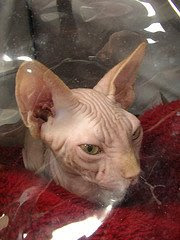 good job generally but there are too many pulling in slightly different directions which weakens the cat fancy.

Of the facts about cat breeds the most important to the public in my view is the appearance of the cat and then behavior. The photographs on the Pictures of Cats site and this site cover the appearance more than adequalely. As to behavior, realistically all domestic cats behave in a very similar manner. Although, you see on the Internet lots of descriptions of the individual cat breeds that imply that the breed is different from another.

I hope that you enjoy the cat breed info on this site and the main site and find it useful.

Photographs illustrating this post are all from cat shows, where the film star like cats get pampered, admired and win prizes:

Cat Breed Info to info about the popular Abyssinian cat