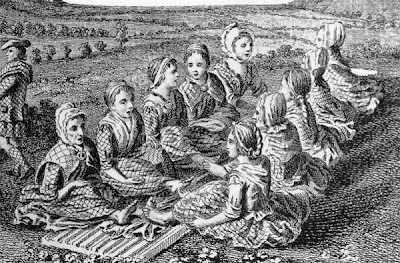 History of Cat Litter - what has this picture got to do with cat litter? Read on. These are Fullers cleaning woolen cloth with a mixture of what we now call Fullers Earth and water. The picture is copyright free as it was made in 1770. These ladies are making what was probably a boring job as interesting as possible by chatting while working (look at their open mouths).

The History of Cat Litter is in fact much like the history of the creation and growth of many businesses but it was a damn good idea. Mind you it was an idea that was destined to be formulated at some time or other.

Apparently the story starts in 1948 just after the second world war, a time of opportunity and growth. Mrs Draper used sand as litter for her cat(s) in those days. Sand was the material most used for litter boxes at that time. So litter was being used but in an informal manner, it seems. She wanted something better if she could find it and spoke with Mr. Lowe a neighbor who was in the industrial absorbent business with his father having recently returned from a tour of duty in the US Navy during the war.

We must at this juncture thank Mrs Draper for having the foresight to see Mr. Lowe. Mrs Draper must have thought that he might have something that could do the trick. In other words she probably had the idea that what he sold might work well. It did.

One of the industrial absorbents Mr Lowe sold was Fullers earth, a clay product. Fullers earth is a mined substance. There are two types but the term is used for similar materials. The term "Fullers" originates in the term "fulling". Fulling is a step in the process of woolen cloth making, in which the cloth is cleansed to remove oils and dirt etc. It was originally cleansed by people who pounded the cloth with their feet. In doing this they kneaded this clay product mixed with water into the woolen cloth. These people were called "Fullers". By far the biggest production of Fullers Earth is in the USA.

Back to cat litter. Mr Lowe provided Mrs Draper with some of his Fullers earth. It worked better than sand as it was absorbent. Mr. Lowe saw an opportunity and offered it to the local pet shop. Initially it was offered free of charge but it seems soon caught on and people were prepared to pay. The rest is history as they say.

Mr. Lowe through his efforts over many years sold and refined the product and turned what he called "Kitty Litter" ® (now a ubiquitous name in the USA but not in the UK - we don't use the word "kitty" here) into big business. His business is called Edward Lowe Industries, Inc. which he sold in 1990 for $210m.

These days the business has moved on and although Mr Lowe's product (i.e. the clay based litter) is probably the most popular, sawdust compacted into absorbent capsules are in my opinion superior although they are not clumping. The failure to clump is far outweighed by the cleanliness of the wood product and its superior odor killing properties. The litter tray stays clean with the wood product but becomes quite dirty with the clay product.

There is just one glitch. How environmentally friendly is the wood product? Is the sawdust a by product of another manufacturing process or are trees cut down for it? The latter would be unacceptable in the modern world.