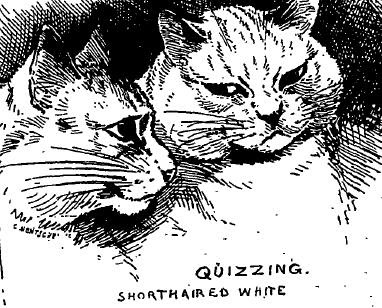 .
Cat History - A cartoon from 1oth March 1894 by Louis Wain who I understand was a well known artist of cats in the form of cartoons as above. In fact Louis Wain was a famous artist and a cat show judge plus he was the second President of the National Cat Club, which was formed in 1887. These images are copyright free from my understanding of the complex copyright laws which I have checked. If I am wrong please tell me.

Some more cat history in the form of newspaper articles about the domestic cat for the Penny Illustrated. These are transcribed verbatim as there is no longer copyright. They provide an insight into how we have changed. Siamese cat history is informative and interesting.

An early form of cat hoarding by a Countess no less. I have reassessed this. I don't think she was a cat hoarder.

THE COUNTESS AND HER CATS

At Hammersmith, last Monday, the Countess de la Torre appeared to answer the adjourned summons for disobeying an order made by Mr Curtis Bennett to abate a nuisance caused by the accumulation of cats in the rooms she occupied in Lille-road, Fulham. Evidence was given by Dr. Egan, who said the nuisance was not abated in her rooms for a number of days. The Countess had since left the house. Mr. Bennett said she was liable for a heavy penalty, 20s a day, but as she had left the house he would not fine her for each day. He, however, hoped that she would not be brought before him again. He then fined her 60s., with 2s costs, to be paid in fourteen days. The Countess said she intended to appeal. Mr Bennett said there was no appeal.

20s = 20 shillings=about £1.70p. Cat hoarding is an illness. The Countess was known to take in stray cats. She was a true cat lover and being known as a cat lover she acquired cats, people came to her. She was not in fact a cat hoarder. Her problem was that she didn't have the correct premises to do what she felt needed to be done. She appears to have been living in a flat. In an article written in 1885 she was doing the same thing and had 21 cats at that time apparently.