"Today I said goodbye to my buddy Benjamin: never experienced a more affectionate and loving kitty."

The full title: "Today I said goodbye to my buddy Benjamin. I adopted him as an older kitty and have never experienced a more affectionate and loving kitty. He was one in a million" is direct from reddit.com. I feel I need to comment on it here, on this website. When I comment on reddit.com it disappears. No idea why. I find the photo very sad. I guess I can feel the guy's distress as I have been through it before several times.  The passing of my first cat hurt the most. It was over 25 years ago and I still feel the emotional pain. It will never leave me. 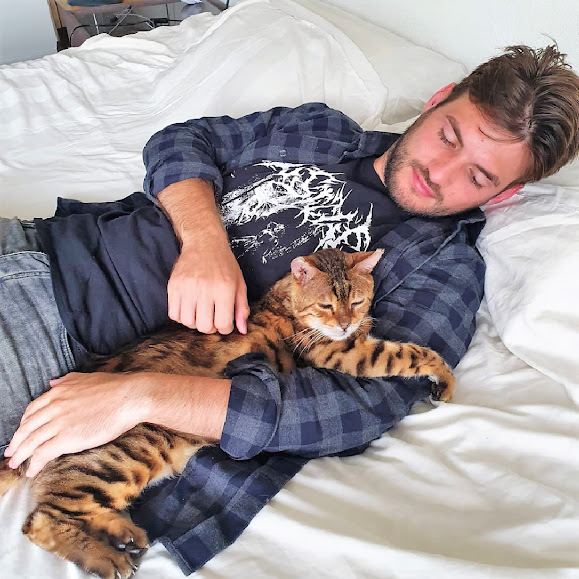 They say cats are members of the family. It is true and for me her passing was more distressing than the passing of my sister, mother and father. None of these deaths were anywhere near as painful as the passing of my darling cat. It was love. Anyway, I won't go on as it is too maudlin. Shouldn't indulge in self-pity. Have to move on.
This guy's cat almost looks like a Bengal cat because of the strong tabby markings and the rich, golden brown background colour: very reminiscent of the Bengal. But I don't think so. He says that he adopted him as an older cat which might indicate a rescue cat. His cat looks elderly in the picture.
You can build a friendship with a cat even if initially you are not sure. Just be consistently loving and interact gently and frequently, over years and bingo, you will probably be handsomely rewarded with a very loving and attentive cat companion who'll sleep on your arm as you see in this photo from reddit.com.
Email Post
Labels: cat death cat love cat lover human to cat relationship Reddit