What percentage of people hate or love cats? 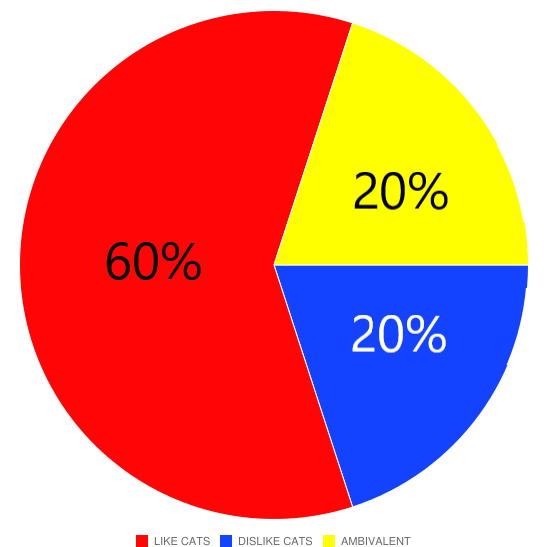 As there is no data on this, I'm going to suggest a figure: 20% of people dislike cats, 60% like or love cats and the remainder are ambivalent i.e. 20%. That is a wild guess, straight out of the top of my head without much thought. The general idea is that more people like or love cats than those who dislike or hate cats. And we have to distinguish between people who dislike them and those who hate them. The number of people in the latter category are relatively small and they are a danger to the animal.

They are predisposed to abusing cats, shooting feral cats (in America legally or illegally) and generally misbehaving with respect to stray an outside cats. There's lots of videos and articles about, normally teenage, boys abusing outside cats for their entertainment. Quite horrible and ridiculous because they end up uploading a video that they made of their abuse to social media which then gets around and they end up with a knock on the door by a police officer.

The same distinction must go for loving and liking domestic cats. True cat lovers are quite rare relatively whereas there are many millions of people in say America who like cats but don't necessarily live with one. Like all things in life there is a wide spectrum of attitudes towards companion animals.

It is important, from my perspective, that parents educate their children to at least respect animals and I am referring to all animals. They should learn that although they might fear cats or even dislike them for whatever reason, they should respect them and leave them alone, at least. It stops and starts with the parents and education. Animal welfare is about knowledge and education. The more you understand animals the less likely you are to disrespect and abuse them.
DISAGREE WITH ME ON THE NUMBERS? Please comment and tell me why.
Email Post
Labels: cat lover chart dislike cats hate cats like cats