Cat in Chicago forced to jump from five floors and survives. Here's how.

The caption to the video from The Guardian: "A cat in Chicago has survived after jumping out of a fifth-floor window to escape an apartment fire. Chicago fire department personnel were taking a video of the exterior of the building as firefighters were extinguishing the blaze when a black cat appeared through billowing smoke at a broken window. The feline briefly tested the side of the building with its front paws, then jumped. The cat survived the leap uninjured..." 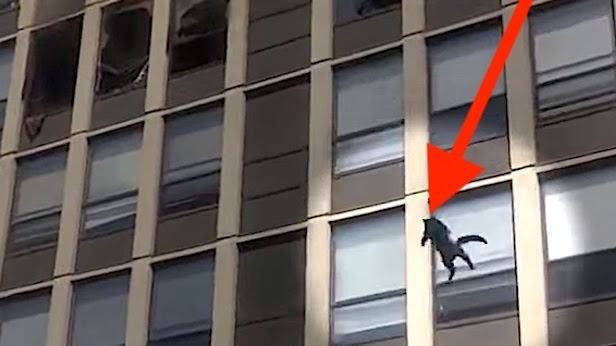 So, how do domestic cats fall five stories and more without harming themselves? Well, the first point to make is that this cat fell onto grass and as you see the entire fall, you can see the contact. The cat actually bounced off the grass indicating that the ground was quite spongy which certainly had a big beneficial effect.
Notwithstanding that, you will find that domestic cats can fall this kind of height onto concrete and still survive. You probably know by now that they manage to do this because they fan out their legs creating a parachute effect because there is quite a lot of skin between their torso and the upper part of their legs. They become somewhat like a flying squirrel. They reach terminal velocity. In fact, they are safer when they fall from a slightly higher height because it allows the parachute effect to work better.
That said many cats die in these falls and I wrote an article about cats falling from Singapore apartment blocks on this particular topic. Below are two more selected pages on the topic of domestic cats falling great heights. The last point to make is that they always right themselves by twisting and therefore they fall on their four legs which also helps to ensure that they generally suffer relatively minor injuries normally from these sorts of falls. Although this is not universally the outcome.
It is remarkable in one way, though, that a domestic cat can jump voluntarily five floors up knowing that they are going to have to fall that great distance. They seem to realise that they are going to survive or they believe that it is possible.
Email Post
Labels: cat falling cat video self-righting mechanism video