🚨 🚨 EMERGENCY VET HELP NEEDED!! A few days ago we had a person come to our rescue to surrender a mom and babies and...

The Facebook post provides you with the story which first emerged about a month ago from this Arizona animal rescue, Little Whiskers Animal Rescue. The rescue still needs financial help I am sure.
It looks as if a cat hoarder was divesting themselves of the cats that they had hoarded (29+)  and among them was a female who gave birth to 5 conjoined kittens. I think they phoned the rescue to say they were coming in with the cats.
This presented a problem for the rescue because of the extra expense in vet bills. So they appealed for help and you can see that appeal in the Facebook post above. 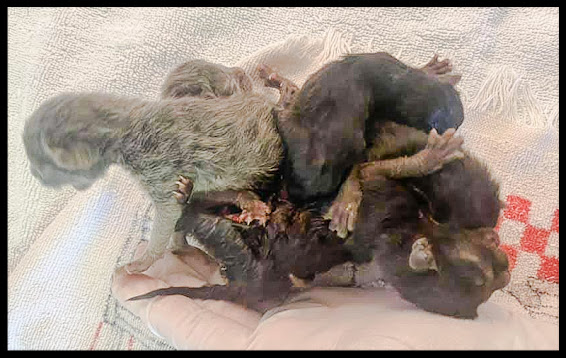 By the way, sometimes these sorts of embedded posts stop working because they are removed from the source which in this instance is the Facebook website. If that has happened I apologise.
Apparently the kittens were joined by the skin of their belly so I believe that they have been separated although one sibling had to have a leg removed in order to separate them out.
The prognosis looked hopeful but as is normally the case I can't right now find a follow-up article on the Internet to tell me what happened. It would be nice to know that they all survived and are doing well so that, in due course, they can be rehomed.
The causes of conjoined kittens or of babies are somewhat mysterious. My quick research on this indicated that the experts are unsure why it happens but it is clearly a developmental problem which may be caused because of a genetic defect or possibly drugs or chemicals in the cat which interrupted the development of these kittens.
Clearly the development of the kittens will include their separation and that seems to have stopped and parts of them has been merged. No doubt this is a rare event which is why it got a loss of news coverage online.
There is definitely a dearth of information on the internet on the causes of conjoined animals. There is almost nothing on the causes of conjoined kittens. This may be because it is so rare. There is no need to do research on this congenital defect.
animal rescue Arizona birth cat giving birth Cat News conjoined kittens
Location: 1102 W Hatcher Rd, Phoenix, AZ 85021, USA