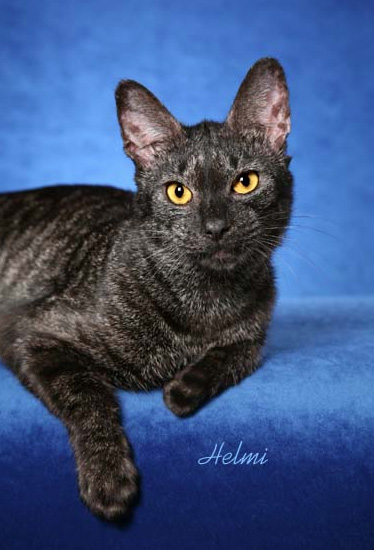 The cat above is a "grizzled" Chausie in cat fancy language or a cat with melanism in more scientific language. She is a silver tipped black Chausie. The cat's name is "Shekinah" and she was raised on Tammy Isaac's Willowind Cattery in South Texas. The photo is copyright protected. The photographer is Helmi Flick.

This post is about melanism in cats. The same principles apply for any form of melanism. Melanism refers to the black pigmentation of melanin.  This pigmentation colors hair, iris of the eye and skin. The pigmentation in the hair, however, is more a very dark, inky, rich bluish/brownish grey as the black coat pattern is still visible as a ghost pattern. Cats that carry the gene mutation that causes melanism are called "melanistic cats". Melanism is caused by a dominant autosomal allele2. The same source says that it is caused by an "autosomal recessive gene"6. This is conflicting information and shows that science is unsure of the genetic mechanisms involved. The conflict may be due to the fact that a different gene is involved in different cat species.

Another phrase that is frequently used specifically for large wildcats is "black panther". Black panthers are melanistic cats. The specific wild cats that this phrase relates to is the jaguar and the leopard (see also: black leopard pictures). These are very similar looking wildcats but they live on different continents. Amongst the wild cats, melanism is most common in jaguars. At one time (incorrectly) black jaguars were considered a separate wild cat species. As mentioned, the pattern is ghosted (see image below). It can rarely refer to the cougar (mountain lion or puma) too. Melanistic pumas are localised or very rare1. A visitor to PoC claims to have seen a 40 lb black cat in Arizona. And please see: I encountered a seven foot long oily black mountain lion...


However, there are many other wild cats that are melanistic. Melanism seems to be common in some species of wild cat and less common in others. In addition to the jaguar and leopard mentioned above, the serval, kodkod, jungle cat, Geoffroy's cat and oncilla can be melanistic while it is a rare condition or localised in the Bobcat, clouded leopard (in Borneo only) and cheetah. Apparently melanistic Geoffroy's cats are common. Partially black and melanistic African golden cats have been observed3. As to the Bobcat there were reports of 10 black bobcats in southern Florida4. As to the cheetah there is a record of one being sighted in Zambia and one in Kenya5. Melanistic servals are found in the Abedare Mountains of Kenya as are also black leopards. Black leopards are also found in the foothills of the Ruwenzoris, the Ethiopian highlands, Congo and South Africa6.

There are some good examples of melanism in domestic cats on PoC. The best is probably the F4 Savannah cat that I photographed at A1 Savannahs called "Midnight".

Information about the genetics behind melanism in cats is very sketchy. I can say this with some confidence because Robinson's Genetics, the premier book on cat genetics, barely refers to it.

"Melanism is due to changes in the "agouti" gene which controls blackness (due to bands of colour along the hair shaft). Cats with normal agouti genes have ticked or banded hairs. Cats with 2 copies of the mutated agouti gene have solid colour hairs. In wild species this causes melanism (in domestic cats other genes affect the colour e.g. black, grey, brown). In most cat species, the gene for melanism is recessive to that for normal colour. In jaguars, melanism is a dominant gene."

1. Wild Cats of the World

2. Foreman GE 1988 Behavioral and genetic analysis of Geoffroy's cat in captivity as referred to in Wildcats of the World page 206.