Cat drooling is often associated with ill health of some sort. The classic reason is mouth disease due to rotten teeth and inflamed and infected gums - please see cat drooling for full details.

But ill health is not always the reason. Sometimes, the reason is because the cat caretaker is petting their cat. Personally, I have never seen this so it is obviously dependent on the individual cat. 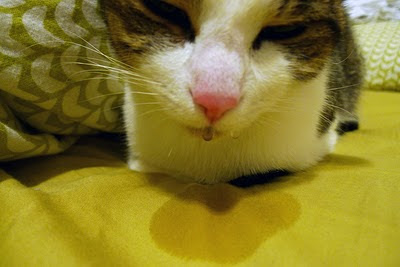 Photo: by emilybean (Flickr)
Petting takes the form of stroking. When we stroke our cat it is the equivalent of a mother cat licking her kitten. Our cats are kept in a perpetual state of kittenhood by us and we are their surrogate mother. They see us as cats.

In my opinion our cat might drool when being stroked by us because he or she is linking the act of stroking (licking) to the time when he or she was at the mother's nipple. At this time the mother and kitten purr to communicate with each other. The kitten is saying, "I am receiving milk". The mother's response it an acknowledgment.

The mother probably licks her kittens at this time. She certainly licks the bottom of her kittens to stimulate defecation.

When a kitten is feeding on his mother's milk he will produce saliva to digest the milk. If there is a connection between, feeding at his mother's nipple and being stroked then it is plausible to suggest that as our cat is kept in a mental state of kittenhood he will salivate when stroked if so inclined.

Some cats salivate so much (hypersalivate) that the cat caretaker has to keep a cloth handy!

If my cat drooled when being petted, I would be relaxed about it but I would also just check to see that his or her mouth was in good health. A routine check of a cat's mouth is easy to do. Just have a peep when they yawn or call out. It is useful to keep an eye the health of a cat's teeth.

From Cat Drooling with Delight to Home Page
By Michael Broad at January 11, 2011