June 10, 2009
We know that deforestation in Indonesia is rapid and vigorous because the destruction of Indonesian rain forest accounts for about 4% of greenhouse gas emissions made by humankind at the date of this posting.

Why does this bother me particularly? Because it is probably the single biggest cause of the gradual extirpation of wildcats in the wild. Many of the small wildcats live in forest:

This is just an example. In this post, though, I would like to mention the very rare Sumatran tiger whose presence in the wild will be severely jeopardized by plans that are being finalised to log 124,000 acres or 50,000 hectares of forest in Indonesia. What is particularly galling is that trees that can take hundreds of years to grow will be converted to photocopying paper that will be used in seconds and thrown away in minutes. 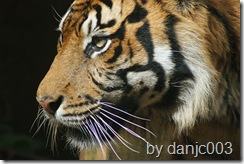 I am talking about an area of forest that is the last remaining untouched forest, near the Bukit Tigapuluh National Park: 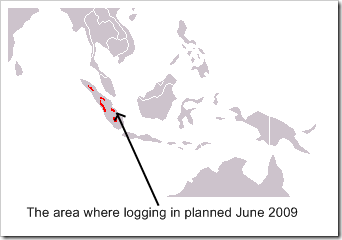 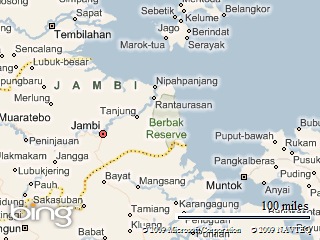 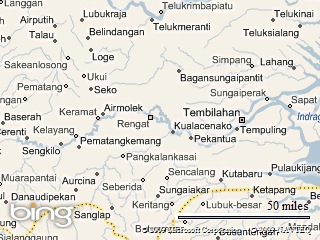 The parcel of land to be logged is near the town of Rengat in the middle of the second map. This is where the Bukit Tigapuluh National Park is. In the top map it is top left of the map. There is a slight discrepancy between the embedded maps and the image map above. Here is a Google map of the area.

The Bukit Tigapuluh National Park itself has been logged. This is meant to be some sort of reserve, a protected area! Having almost destroyed the park, the logging company in league with the government, looked to more virgin forest, neighboring ancient forest:

The Park itself has been under consistent threat from illegal logging and Palm oil plantations, with two thirds of the park logged (Wikipedia)

The government clearly has no concern for the tiger and are it seems are solely concerned with making a fast buck. Palm oil is popular at present as an alternative to petrol. It is use as a bio-fuel. So the demise of the Sumatran tiger is down to paper and fuel.

The company concerned is Asia Pulp and Paper (APP). Their website declares that they are concerned with the environment bla bla bla. Pure ***. “Care for Tomorrow” …..” We support actions for……environmental sustainability” bla bla bla.

APP has a very poor history. Do an internet search and you see words like “corruption”, “bullying villagers” “environmental exploitation” etc. This is clearly a bad company with a bad history of slash and burn disregarding the people and their lives and wildlife. They are supported no doubt by the Indonesian government. Say no more. And you know what? Nothing can be done about it except stop buying their products.

Back to the Sumatran tiger. Between 1982 and 2007 APP deforestation may have killed 70% of the Sumatran tiger population in killing 450 of them (src: WWF). APP claim that their logging protects forest by preventing illegal logging. They say “well managed pulp wood plantations act as buffer zones”. The trouble is they are just cutting down old forest. Where are APP’s plantations? Deforestation in Indonesia is killing off the Sumatran tiger, elephants and orang-utans.

Currently, there are only 100-400 Sumatran tigers left in the wild (Wikipedia)

Photo of Sumatran tiger: published under a Attribution-NonCommercial-NoDerivs creative commons License -- this site is for charitable purposes in funding cat rescue.

From Deforestation in Indonesia to Home Page