Reason to Keep Your Cat Indoors

- June 29, 2009
Here is another reason to keep your cat indoors, permanently. It is all over the cat news. It is the always fatal (although this could be 95% fatality), no cure, bobcat tick disease. The disease is caused by the blood parasite Cytauxzoon felis, which is carried by the American dog tick, which in turn is carried by the American bobcat in America but in Africa, this disease is carried by ungulates (animals with hooves). The parasite does not affect the bobcat, which is widely distributed throughout the USA. The disease is called cytauxzoonosis after the name of the parasite.

"The pathogen is spread to domestic cats through the American Dog Tick (Dermacentor variabilis), which can be found in heavily wooded areas and fields. Because of the route of infection, it is most likely that outdoor cats develop the disease. The biggest risk of infection occurs in May through September, but even during that time, it is a very rare disease." (Wikipedia) 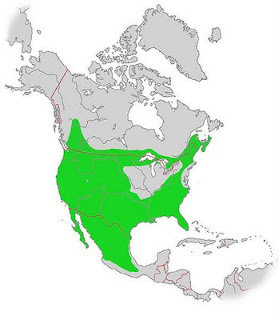 Although it is rare, it is fatal which creates a dilemma for cat owners. Do we let them out? When a cat lives in an area that is suitable to go out (i.e. quite and traffic free - are there such places?) there is this added danger. It is a fast moving and nasty disease that causes a painful death.

Initially, the disease shows no apparent symptoms. When the symptoms show the cat is near death. Quite shocking and frightening. The disease is in the news because of the loss of 4 cats in one family nor far from Topeka, Kansas:

The disease is caused by a protozoa microorganism, which gets into the red blood cells of the cat which causes severe anemia. There are also blood flow problems through some of the cat's organs e.g. the liver and spleen. The organs fail. The symptoms start 1 to 2 weeks after infection and are:

Historically this nasty disease is found in the south and south east of the USA . The temperature and humidity are high in these areas. However, it is migrating north and west due to climate change and bobcat migration.

As the disease is fatal the only action that can be taken is preventative measures and it is regrettably one more reason to keep your cat indoors. This is a shame. Keeping cats indoors will prevent transmission of the disease from bobcat to ground to domestic cat. Another measure is the well known Frontline:

"Although it can be prevented in most cases by use of such medicines as Frontline, there have been cases of cats treated with this medication that have died of Cytauxzoonosis because of the delay between application and absorption into the hair follicle of the feline"