Siamese Cat Behavior does have a certain reputation but this may be slightly exaggerated. There are 7 areas to cover when discussing Siamese cat behavior if you want to do a thorough job 😉.

As this is a very long page in which I discuss domestic cat behaviour generally as I must when discussing the behaviour of a cat breed, you might like to dip into the early part in which I report on what an expert says about the behaviour of the Siamese cat family. And there is a Siamese cat family because the Siamese cat is within a number of other cat breeds such as the Balinese, Oriental Shorthair and Oriental Longhair. And there is a range of Siamese cat types. It is a pretty big topic.
Expert opinion on the Siamese cat family
Gloria Stephens who is a past cat breeder and cat show judge (book: Legacy of the Cat) states that cats of the Siamese cat family "are vocal to the point of loudness and are quite active". They really like to sit on their owner's lap and sleep next to their owner at night. In her words, "They want to be as close as possible, and their need for closeness verges on the desperate."
And as they are intelligent, they like to investigate and "comment on everything their owner does". This makes them "demanding cats". But then to satisfy this demand all you have to do is to be close to your Siamese cat, hold them and stroke them. In short love them as an excellent cat caregiver.
General cat behavior

Obviously, a Siamese cat whether Modern or Traditional will have common domestic cat characteristics, which will be more pronounced than the particular breed characteristics. Realistically all purebred cats are very similar in character. It is usually the exotic wild cat hybrids that show some differences such as the Bengal cat.

Cats will act instinctively, which means reacting to what is going on around them. They are essentially, if one goes back thousands of years, domesticated wild cats. This is relevant as what they do is rooted in wild cat behavior. Their hunting skills come readily to mind. They are adapted to hunt so they have great senses. Play can lead to a scratch if it is too rough, for example. Play is a learning process for hunting.

Intelligent cats - and some breeds are I believe more intelligent than others (although there is no hard evidence to support this) - will be more inquisitive and generally more active than less intelligent cats.
The Sphynx cat is thought to be more intelligent than average. We know that the Persian cat is affectionately known as a piece of furniture (i.e. static and undemanding). I wonder how cats feel about this? Being thought of as being a lesser cat breed in terms of intelligence.
Cats don't mind as they're more tolerant than humans. We should agree that intelligence has a say in cat behavior generally. Siamese cat behavior will be subject to these general cat traits and Siamese cats are intelligent. This should include close relatives such as the Oriental Shorthair, Balinese and Javanese.

Due to nature (genetic traits) and nurture (environmental impact) individual cats will have differing temperaments. For example, difficult early years will or might make your cat more defensive. This will translate to being more static and less adventurous. This in turn may lead to weight problems. Or, a cat may be more prone to being nervous. This might translate to poor litter habits. These are individual traits which are similar in their variety to those found in humans.
Siamese cat behavior (as a cat breed) will be substantially modified or completely altered by possible individual traits. This is less likely to happen in a cat bought from a quality Siamese cat breeder as the breeder will ensure that cats in her charge are well socialized (well-balanced characters and good with people and pets). A quality breeder will effectively take out of the equation the variation in character due to environmental factors.

Cat breeders keep unaltered cats for breeding purposes. They often keep their male cats in outdoor pens. That just about says all you need to know about the behavior of male unaltered cats. Castrating a male cat eliminates the natural sex drive which has the pleasant effect of reduced territorial fights and injuries. Spraying urine (scent marking) is also reduced significantly. The lack of sex drive makes them more inclined to stay at home, a trait which makes them more domesticated, in effect.
In other words, it makes domestic cats less like wild cats and more like domestic cats; the cats that we like to live with. As for females they spray too and there is no pregnancy to worry about once neutered. Altering as some breeders call it, is pretty well essential despite seeming a little cruel. It is really a consequence of living as a domestic cat.

Illness can affect Siamese cat behavior. Sometimes unexplained behavior, perhaps untypical aggressive behavior can be put down to an illness or injury. A vet is the only person to decide the best course of action in this instance. Illness though can affect behavior generally. I wonder if the propensity of the Siamese cat to having a squint (cross eyed) affects this breeds behavior?

I mentioned cat intelligence earlier on. It is not surprising that Siamese cats are at the top end of the intelligence league. This is reflected in this breed's vocalizations and attachment to humans. This is a cat that is involved in the human/cat relationship and the Siamese is not backward in coming forward in asking for something when the occasion demands. So, all other elements being equal and on the assumption that your Siamese is well socialized and well balanced she should be a little more inquisitive, involved and interactive than the average mixed-breed cat and the majority of the purebred cats. This means more input for the person keeping the cat.

This "people orientation" may translate into an issue if another cat joins the family. I immediately think of Helmi Flick's F1 Chausie that lived with her for a time. An F1 Chausie is a wildcat hybrid and quite demanding. They form close relationships with people. They are intelligent. I could see a disturbance to the balance in the relationship if another cat or person was introduced into it.
One site called it jealousy but this is not an emotion that cats feel (or am I wrong?). However, cats love routine and if the cat has a close relationship with a person and this is disturbed it would cause upset that could be seen as jealousy. Cats take a long time to settle into a routine. Routine provides a comfort zone, something all animals (including humans) like and don't want disturbed.

Siamese cat behavior is considered by some to be extrovert in comparison to some other cat breeds perhaps because Siamese tend to be more vocal. Their need for human companionship is expressed in their vocal demands. But let us remember that all domestic cats depend on us, as that is what makes them domestic cats.

In truth cat breeders and the cat associations tend to exaggerate the characteristics of a cat breed, particularly the breed they are breeding to distinguish the breed from others. It is important to distinguish breed from breed to justify the breed. The variations from cat to cat will sometimes outweigh the differences from Siamese cat to another cat breed.

The Wikipedia author proposes that the Siamese cat coat (white with points) contributes to this breed's character in that the coat makes this breed less well camouflaged and therefore more dependent on people for survival. Hence the desire for a closer connection with humans. This begs the question as to the development of the coat color and pattern. It is certainly not the best for survival. That accolade for that must go to the tabby cat coat.

From the point of view of people living in the West the history of the Siamese cat starts late in the 1800s on the importation from Siam of a Siamese cat. This cat was a Traditional cat. What happened in Siam (now Thailand) to create the pointed coat? The pointed coat is probably due to a genetic mutation.
If this happened naturally in Siam (and the history of the Siamese cat goes back a long way in Thailand) then this theory could have merit. It is a development that leaves the Siamese more vulnerable. Think of all the wild cats (except the big cats) such as the Scottish Wild cat and the American Bobcat .They all have the best tabby coats you can see. These provide great camouflage. The top cats like the Tiger are not well camouflaged as they have no predators.

There are a number of posts on cat behavior on this website, which discuss cat behavior from various aspects. You can use the labels panel to select these posts. Here is one on cat breed characteristics.

There used to be one Siamese cat, the standard regular looking cat as imported into the UK in the latter part of the 1800s. Now things have changed. This change was brought about entirely by cat breeders breeding for a more "elegant" and "extreme" or plain skinny figure. These contemporary cats that I have called "Modern Siamese" may have altered characters.

My research indicates that they are less robust from a health point of view. But do they have different characters from the Traditional Siamese cats? The answer is probably not. There is certainly no obvious evidence that Modern Siamese behave differently. But being noticeably thinner and therefore more prone to being affected by ambient temperature may affect their character and eating habits (greater heat loss). Modern Siamese are in my opinion less healthy and this will be manifest in an altered behavior (depressed and less active). The Modern Siamese may also be nervous. 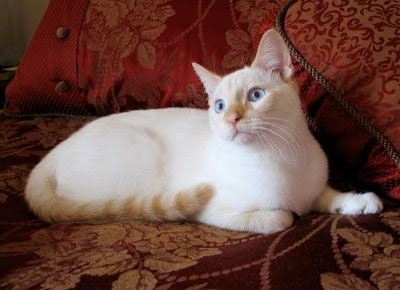