An example of irresponsible cat ownership

This tweet caught my I as an example of irresponsible cat ownership. It is just one minor incident in the grand scheme of things. Just one animal or cat shelter who posted the information on Twitter. But it combines two elements of irresponsible cat ownership. The first is not spaying a female cat and so, in this incident, the cat becomes pregnant. And to compound the irresponsibility, the owners abandoned this cute, white female cat when they left their apartment. 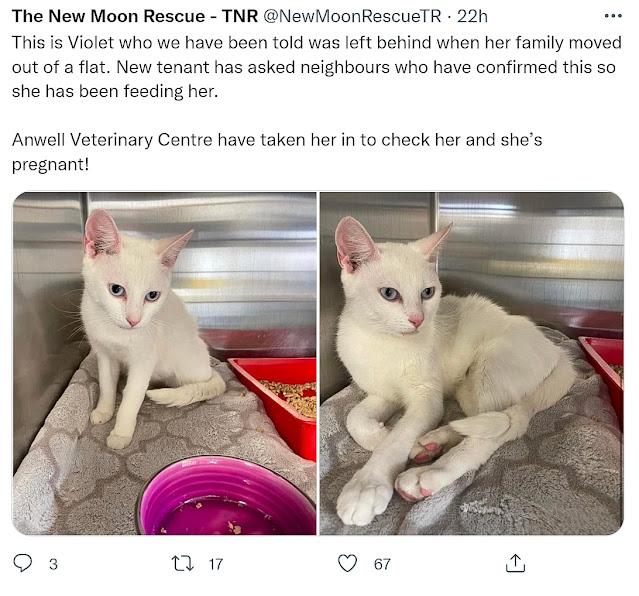 But it has a happy ending because the new tenant in the apartment obviously bumped into the cat because she was there and asked whether the cat belonged to the previous tenants which was confirmed. Knowing that they had left and abandon her she appears to have adopted the cat. I've presumed that the new tenant is a woman.

When you think about it the previous tenants were highly irresponsible because what if the apartment was left vacant for a couple of months? The cat would have died of starvation and the kittens inside her. I don't think you could be more irresponsible as a cat owner than that. It happens. People do just throw away their cat or cats sometimes. It's a form of human psychopathy. It is psychopathic behaviour because if there is any sensitivity towards others, both humans and animals, you wouldn't do this. You would feel the pain that you are causing. This would prevent this cruel behaviour. But there are a lot of people like this. They are everywhere; many more than people probably envisage.

Look at Vladimir Putin for example! He's the world's greatest psychopath and mass murderer. He has absolutely zero sensitivity towards the suffering, pain and death caused by him of others including hundreds of children and elderly women. I am digressing.

The New Moon Rescue is based in Surrey, UK by the way. The British are meant to be a cat loving race of people! Clearly not all of them are.