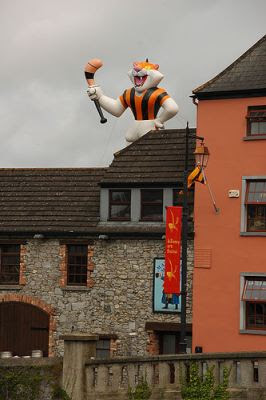 This is I believe a representation of the Kilkenny hurling team, who are called the Kilkenny cats in recognition of the fighting spirit of the original and real cats (see story below). Photo copyright The man with the golden cam. The orange and black striped shirt is meant to represent a ginger tom cat.

The Times archive is a fascinating source of information. The author of an article in the 31st, 1864 edition purports to know the origin of the Kilkenny cat.

The term Kilkenny cat refers to a person who fights with tenacity. Several origins of this term have evolved. The Times journalist of 1864 thought he had the right answer as to the origin and he probably did. This is it.

A rebellion occurred in Ireland (didn't they always) in 1798 or 1803. As a result Kilkenny was garrisoned (troops were assigned to a military post) to, I expect, keep the peace. The soldiers in the garrison where Hessian (soldiers from the then principality of Hesse Kassel, now in Germany - they were then German soldiers).

They had the appalling and utterly cruel custom or habit (to pass the time of day, I expect) of tying two cats together by their tails and then hanging the cats over a clothes line so that the cats were forced to face each other. Under these cruel and uncomfortable circumstances they fought each other until one succumbed.

This custom became known to the officers who wanted to stop it. On an inspection of the barracks to catch this act happening, a soldier cut down the cats with a sword, cutting through each cats tail.

The cats fled leaving their tails hanging on the line. The explanation given to the officer was that two cats had fought and consumed each other. As they must have fought with incredible conviction to have eaten each other a saying evolved, "to fight like a Kilkenny cat", to mean fighting with conviction and tenacity. Which is why the Kilkenny hurling and Gaelic football teams like to call themselves the cats.