Stress of moving home can makes us leave behind our cat

Moving home is stressful. People do forgetful things at best and crazy things at worst when they are stressed. So when we move home we tend to leave things behind or, to put it another way, we lose them. And I will put it in a third way: removal company employees steal items. Are you like me when I believe that removal company employees steal valuable items which you have hidden away and forgotten about? 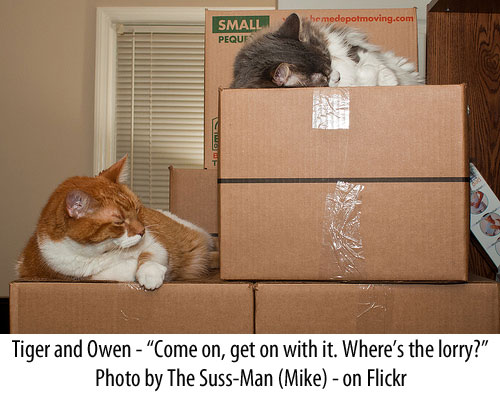 It is so easy to do and we might only discover that an item has been lost months if not years later. That is why I believe removals companies become involved in this form of theft. It's a personal viewpoint perhaps but I also believe other people have the same thought.

It is also possible to mislay your cat when you move (or for a cat to be stolen, I'd argue). This is according to Animal Home Insurance. Their research tells them that about 50% of UK homeowners have lost or misplaced something when moving home. And among that long list of items which I reproduce below you will see the domestic cat.

And I'm going to speculate some more. I have seen on more than one occasion a cat companion inquisitively hopping onto the removal lorry or van (on CCTV). You know how inquisitive domestic cats are. Something new like that will always appeal to them. They become either trapped or if they jump on towards the end of the removal they are locked inside. Then they are transported perhaps hundreds of miles across the country to their new home.

In the meantime the cat's owner's are scratching their heads as to where there cat has disappeared to. Only when the removals employees unload the lorry do they find the cat. Regrettably this may be days or even weeks later. The cat's life is in jeopardy but they are great survivors as we know.

I suspect, too, that sometimes when the relationship between cat and caretaker is somewhat loose, the homeowner forgets about their cat at this panicked time. The cat may have run out of the home because of all the commotion. They may hide somewhere nearby. They may only emerge when the lorry has gone and so have their owners.

It is sometimes said that the domestic cat is more attached to their home (and therefore their home range) than their owners. There is an argument that a cat should remain in their home when it is sold and should become a cat belonging to the new owners provided they like cats and accept that extravagant and extreme concept.

On a more financial note, some people do like to hide cash in safe places in the home but they hide the stuff for so long that they forget about it. One homeowner mislaid £30,000 in this way. The same goes for jewellery and indeed any other expensive item which is put away for safekeeping.

There is an argument that we have too many possessions nowadays. Many possessions are not used or seen for years. Perhaps we should not own them? Divest yourself of unused items but never do that with a cat.