Interesting facts about the Abyssinian cat

The most interesting facts about the Abyssinian cat come from it's history. I know that the history of the cat breeds does not fascinate people as much as their appearance but in this instance I have to write about it. There is one story which I think is very interesting about the origins of the breed. It is a bizarre historical incident. 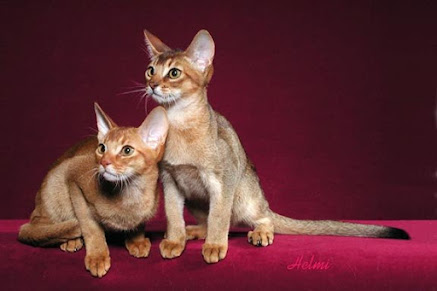 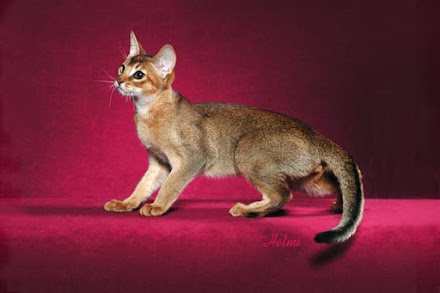 Both the above photos are by Helmi Flick

The Emperor of Abyssinia (now Ethiopia) in 1860 wrote to Queen Victoria to ask her to marry him. She ignored the letter which annoyed the Emperor resulting in the arrest of some Europeans including the British consul. The British government overreacted and sent in a force of 32,00 to release him and the others. The Emperor panicked as the troops approached his residence and he blew his brains out with a pistol given to him by Queen Victoria!

The fighting was over before it had started so they offered gifts to a local chief and went home. On their way home some of the soldiers picked up pet kittens from the friendly local people and returned to England with them. This is said to be the beginnings of the Abyssinian cat breed.

The first Abyssinian cat in Britain, according to a man called Gordon Stables writing in 1874, was an individual called Zula who was brought to England by the wife of captain Barret-Lennard in 1868. This is the date of the end of the Abyssinian confrontation. It is possible that she obtained the cat from one of the returning soldiers referred to above. "Zula" refers to the name of the northern Abyssinian port at which a British military expeditionary force established its first base in 1867.

That is the more romantic version of the origins of the Abyssinian cat. The more pragmatic and perhaps realistic version is that the cat was simply created through selective breeding in England at the end of the 19th century. It appears that there was a substantial amount of crossbreeding of cats with ticked coats in order to fix what is now perhaps the defining feature of this cat namely the ticked coat. This is an agouti tabby coat without the strong markings with which one is familiar. The appearances salt-and-pepper rather than dark swirls or spots and stripes.

Although it seems likely that some cats were indeed brought back to England after the brief war with Abyssinia. Perhaps the selective breeding took place around these cats and they were refined by mating them with carefully chosen British shorthairs.

The first time I saw an Abyssinian cat I thought that it looked very similar to the ancient Egyptian cat statues in museums. It raised the question as to whether the Egyptians, many thousand years ago, lived with cats similar in appearance to the Abyssinian. There is no evidence to suggest this however. This misconception may have come about because the Abyssinian cat's appearance is very regular and normal. This is one of the outstanding features of this cat breed. Although the cat is quite slender and athletic there is nothing extreme about it which is refreshing bearing in mind some of the extreme bred cat breeds such as the flat-faced Persian.

Some authors suggest that the Abyssinian was first listed as a breed in 1882 but this is contested. There was a "Standard of Points" (breed standard in modern terminology) in 1889. It was published by the founder of the cat fancy, Harrison Weir. The first Abyssinian to be registered at the National Club Studbook occurred in 1896. The first individual Abyssinian cats to be exported to the United States were shipped out in 1907.

As to temperament, there are many descriptions but it would be surprising if there were anything but excellent companions. I shall rely on Gloria Stephens who says that they communicate with their human companions in an open and loving way. This cat likes to talk with people in a "euphonic voice". They make a loyal, loving companion. This is a gentle animal capable of understanding the feelings of their owners. The Abyssinian is an inquisitive cat with great climbing skills combined with grace and agility. Yes, they are an athletic cat breed.

Their appearance is medium-sized. They are muscular, shorthaired and have slender bodied. The head is "slightly wedg -shaped". The ears are large with almond-shaped eyes. The tail is long and tapering. The long-haired variant of this very popular breed is the Somali. In my view the Somali is more attractive than the Abyssinian and their appearance is somewhat like that of a fox. They photograph beautifully in the studio. I can vouch for it having attended a photographic session with Helmy Flick in the USA at a cat show in which she photographed the most glorious Somali cat.

The original colour form is the rusty red coat called "ruddy". This was the sole colour until 1963. The colours have been expanded substantially.