It has been found that mammals, which of course includes the domestic cat, produce a hormone in a part of the brain called the hypothalamus, which has been described as the "love hormone".  It's technical name is "oxytocin". The hormone is associated with friendliness and, for example, sexual intercourse and is produced when animals interact with themselves, or when people interact with animals, on a friendly and intimate level.

Because there's a great similarity in the way this hormone is produced by both the human-animal and the animal it has been concluded that the domestic cat feels similar emotions to people when they fall in love. 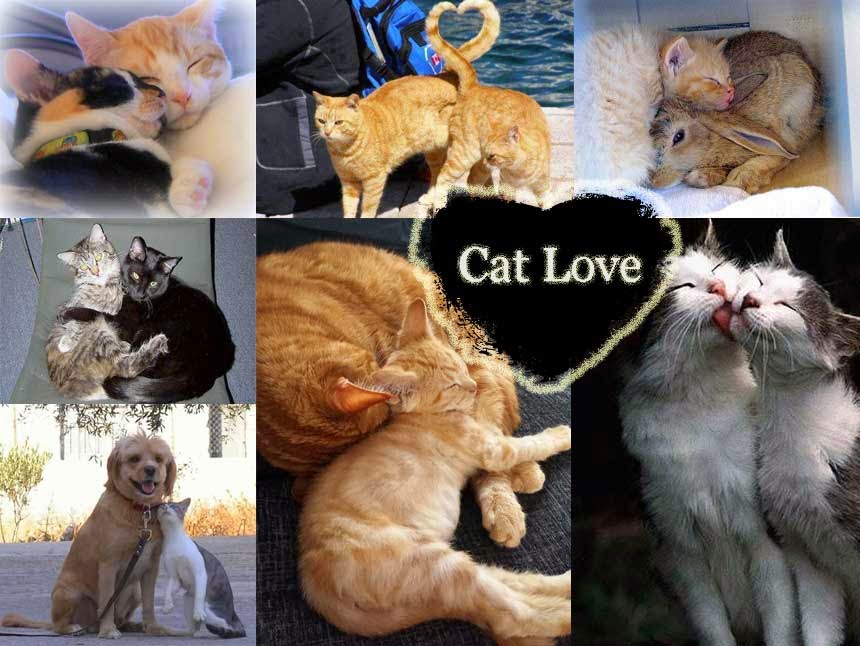 I have extended that presumption a little bit because we do not know exactly how animals feel including of course the domestic cat but I think it is fair to say that if the production of the hormone is very similar and as the hormone is produced during intimate relations as described, it is likely that the domestic cat feels the same as humans under these circumstances.

Paul J. Zak, a professor at Claremont Graduate University carried out the research.  Interestingly, he refers to a friendly relationship between a goat and a dog; what I will call an interspecies relationship-the kind that I really like to see.  When the goat and the dog were playing he discovered that the production of this so-called love hormone was extremely elevated in the goat to a point where he came to the conclusion that it was likely that the goat was in love with his dog companion.

For me, what is important about this finding is that once again we are reminded that anatomically the cat is very similar to the human in many ways and it also sheds light on how a cat feels.  There is always a lot of speculation about how cats feel.  For example the feeling of pain.  Cats feel pain but it can be difficult to judge how bad it is.  Cats can feel depressed or contented but once again it is hard to measure these emotions.  And because it is hard to measure these emotions people tend to undervalue them in the domestic cat.

This further research by Prof Zak will help people to respect the cat more, I hope.  Daily we are understanding animals better.  We are understanding the kind of intelligence that they possess and it is my passion and hope that we can begin to see them as equals as a result.

When cats living groups you often see friendships forming.  Cats that are friends with each other groom each other.  One can imagine that two cats grooming each other and enjoying each other's company have an elevated reduction at that moment of oxytocin. I think people should be aware that because it should make people more sensitive towards their cat companions.
Email Post