Recently, a Labrador named Sasha won the animal equivalent of the Victoria Cross when serving the military in Afghanistan, sniffing out explosives.  Both she and her handler Sgt Dodds was shot dead in 2008 while on patrol. 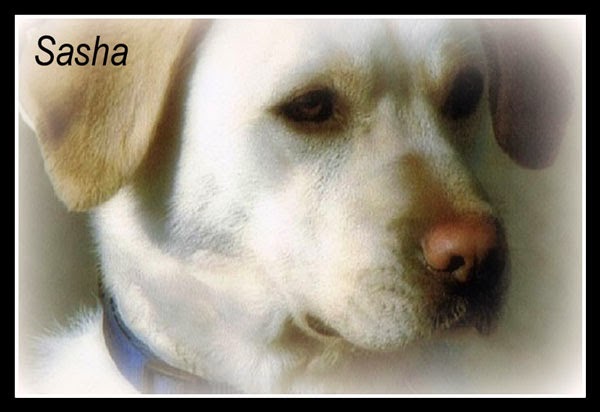 During military service in Afghanistan, Sasha had made 15 confirmed findings of explosives clearly saving many lives while exposing herself to injury and death (as was her handler).

What a wonderful dog but are people as wonderful?  Is it right that we should put a wonderful dog into a war zone to help win the war for Americans and British against the Taliban? A dog doesn't know anything about war.  Sasha was simply trained to smell the odour of explosives.  She never knew what explosions actually were and had no idea that she was helping to protect military personnel fighting a war.

Wars are a complete failure and the Afghanistan war is more of failure than other wars.  This is failure upon failure and then, it could be argued, we glorify war and validate it by awarding a wonderful dog with the animal equivalent of the Victoria Cross (Dickin medal) for her bravery.  Do animals know about the concept of bravery?  I'm not sure they do.  Animals just do it.  And dogs do what they are trained to do.  A dog does not know that they are in danger - that they might be killed at any minute.

Wars are a human creation and a reflection of the failure of humankind to resolve disputes in a sensible manner.  Why should we involve any animal?

If the military in a war want to discover where explosives are they should devise a method to do that which is both effective and which protects them from injury and death.  Is that beyond human ingenuity?  It would have been better if the military could have poured a few million bucks into that project.

When you consider the billions and billions of dollars and pounds poured into the Afghan war why couldn't a few hundred million been poured into devising a mechanical method to discover explosives under the ground by the roadside?

It's just easier to train a dog.  There are lots of dogs and every one of them is very able to sniff out explosives and we all know that dogs are easy to train.  And they are loyal and will do as they are told.  Does this mean that people should exploit them by putting them in danger in war zones?

The Dickin medal is a wonderful award.  It is awarded by the PDSA in the UK.  But if I wanted to be very critical of it - and I don't want to be critical - you could say that, as mentioned above, it validates the concept of warfare and you could say that it supports the enlisting of animals as military personnel.