Airgun attacks on cats keep on occurring in the UK. There seems to be a type of person in the UK, probably a young person, who is idle, sloppy, rather nasty and very badly brought up who likes to shoot cats with an air gun. These mysterious cat haters seem to populate all four corners of our island (see i hate cats). My vision or instinct (admittedly probably biased but it is all I have to go on) is that these social underclass types, mindlessly take pleasure in this sick pastime. I can visualise him looking out of his bedroom window wondering what to do and then seeing a cat wander by below decides that it would be amusing to test his hunting skills with the air gun his absent father bought him for Christmas.

If he was in America his father would have bought him a high powered hunting rifle and spent many an hour telling him how he had bravely stalked cougars in the mountains. Of course he wouldn’t have mentioned that the cougar had no chance because he used a pack of bl**dy hounds to track and corner the cat before shooting it at close range. It is the same thing only on a different scale as for all things American. In America they eat more and kill more than in Great Britain but the same mentality exists for that “type” of person. The one who simply doesn’t get it, who never will get it and who arrogantly and with ignorance looks down on other animals as objects to shoot.

These strange people have no awareness that an animal feels pain and pleasure. That they have a right to exist just as much as people, whether they are domestic cats or wild cats. A particularly hideous example of hunting cougar is when these mindless idiots stalk female cougars with cubs. The cubs are left motherless on her tragic and mindless death and die too. And it is that, the mindlessness of it all that disturbs me. There is a vast number of people who are simply switched off.

And, yes, I am talking down to these people because that is all one can do. Why is the world so divided over hunting? There are millions of people who see nothing wrong in hunting and shooting a mountain lion in America. And there is an equal number who hate the very thought of it. How dysfunctional is that? All I know is that it is wrong, very wrong and that it is a nasty throwback to the time hundreds and thousands of years ago when hunting was a necessity – it is no longer, so please stop!

What prompted this post was the usual story in the UK of yet more cats being shot and badly injured by air gun pellets. On this occasion it is in Oxfordshire. The home of well heeled people and Oxford University. The cat keeper concerned is Denise French of of Gwyneth Road, Littlemore. 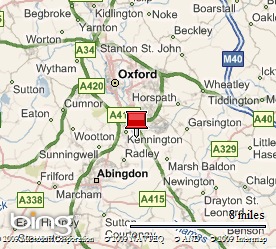 Her cat is Pippin who needed an amputation of the leg after being shot late in June. The area is marked on the map to the right.

This is the second time it has happened and I would expect it to be the same person or group of people who carried out the criminality on both occasions and I would also expect them to be local. Pippin would roam the scrubland behind her house. This implies that it happened there and as I said that the culprit is local, perhaps very local. I would knock on doors!

Mrs French hopes the news story will shame the criminal into stopping – a fat chance! If this person had a conscience he wouldn’t do it in the first place. The only way is to catch him and punish him and the police are not all that good at that, really they’re not. This is low level crime despite a pretty hefty sentence on conviction of a maximum of 6 months in jail and a fine of £20,000. It is also worth mentioning that such low level crime (in the eyes of the police) is often a precursor to serious crime against people as it is sign of a maladjusted individual. 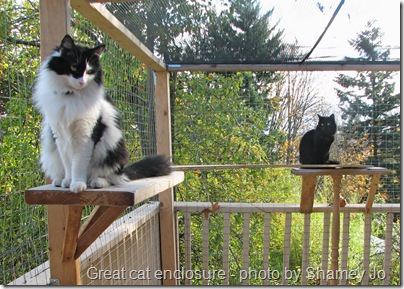 The above cat enclosure has no connection with this story – just a nice example of a cat enclosure which by the way give peace of mind to us – so double benefit. Photo by Shamey Jo (new window)

On good thing has come out of this. Mrs French has decided to build a cat enclosure and to stop her cats wandering. I like cat enclosures. They allow a cat to be outdoors, to smell the outdoors and watch. Cats can watch for endless hours and take amusement from it. Notice the contrast in forms of amusement. The human likes to kill to amuse while the cat watches. And I don’t want to hear people say that domestic cats wipe out a ton of wildlife. This is not true but something propagated by bird conservation societies and the like in their war against the cat. Anyway outside a cat enclosure birds are protected.

The RSPCA agree that they see all to many cases of cats being shot with airguns. Many are killed and those that aren’t have the quality of their lives severely curtailed, very often.

Another airgun attack on cats also occurred in Oxfordshire, this time in nearby Chinnor, Oxfordshire. Both incidents are marked together below: 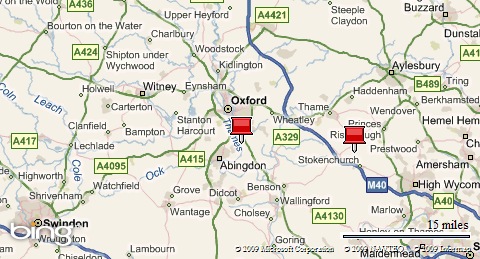 I don’t think that these are related because, as mentioned, my view is that the shooters live near to where the shooting took place. I cannot see a person driving around the country (and these two shootings are 15 miles apart) just to find a cat to shoot (unless they are seriously barmy as well as nasty). But airgun attacks on cats is so easy and convenient. Airguns can be bought over the counter in the same way real guns can in the USA. And in the UK cats are often left to wander unlike in the US. The airgun attacks on cats are a crime waiting to happen because all you need to create that toxic mix is an ignorant, idiotic and nasty individual to aim the gun at the cat.

I would advocate more cat enclosures in the UK and for cats to be managed a little more carefully. Gone are the good ole days when human population was a lot lower and traffic far less than today. We still act in a manner reminiscent of the 1950s concerning cats going out and wandering. Although, I personally don’t like the idea of a cat being permanently kept indoors especially when there is room outside in the garden to build a cat enclosure. In the US, where there is a lot more space and property prices significantly more manageable, a cat enclosure would seem a real possibility but few take it up preferring to keep their cat indoors. Sure, there are still risks of catching fleas and ticks etc. in an enclosure but there is risk in everything and risk needs to be set against quality of life.

From Airgun attack on cats to Home page