Chihuahuas vs Cougar Story is Pathetic

This is a story of small dogs frightening off a cougar in Los Angeles. The video is below.

The shame of the Chihuahuas vs Cougar story, though. People are pathetic! This story has thrown up a ton of idiotic comment. First, however, I do not see anyone other than one website mention the fact that this cougar was shot after this event, which has caused laughter and hilarity! First, they shot three tranquillisers into the cat then they shot it.

“Authorities confirm officers with the Department of Fish and Game were forced to shoot and kill the animal. They had hoped to return it to the wild.” (src: http://www.ktla.com/news/landing/ktla-garage-cougar,0,224308.story) new page – link provided in thanks for verbatim quote.

Shot, after this poor cat was frightened off by three tiny dogs! What the hell are Americans doing? Why are people we so frightened of this cat! Americans are far too trigger happy. Is it because they thought the cat was rabid (had caught rabies)? There is no evidence of that as far as I can tell.

The event took place in Los Angeles, California, I believe. It is the only state where cougar hunting is banned. And to compound the sorry state of this story there is a horrible hunting website (fieldandstream.com) that makes gross misrepresentations about the cougar. They would do this because they are into killing this animal. They like killing beautiful animals, I guess. 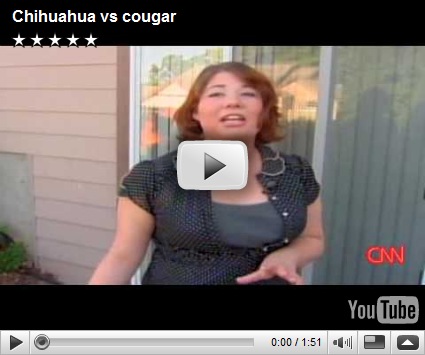 First they refer to “California's cougar troubles”. What the heck are those? It is you who are the trouble and people like you. They then make a gross misrepresentation and say that the “California's mountain lion population immediately began dining on said voters.” (meaning that the people who voted for a ban on hunting the cougar are now being attacked and killed by the cougar after the ban).

There have been 14 attacks (few resulting in death) on people (mainly unsupervised children) in 117 years in California! - see Mountain Lion Attacks in California for full details). The car kills many thousands of times more (people are 2,000 times more likely to be killed by a car). The domestic dog kills many many more (10 times more likely). The deer kills many more. And yet this idiotic web site author says this. Total bias and totally wrong morally and ethically. I suppose, though, it is to be expected of the hunting and shooting lobby. If you like to shoot innocent animals for pleasure you have got to be the type who behaves like this.

This pretty much explains all of the cougar “problems” from the cougar’s standpoint. A lot of people in America (not all, of course but it seems the majority) generally just don’t care and are more interested in sex, consumerism and food. They are chasing pleasure and getting into debt and missing the real things.