Joe Rogan f-words all the way through his loud, rude (funny?) diatribe about the cat 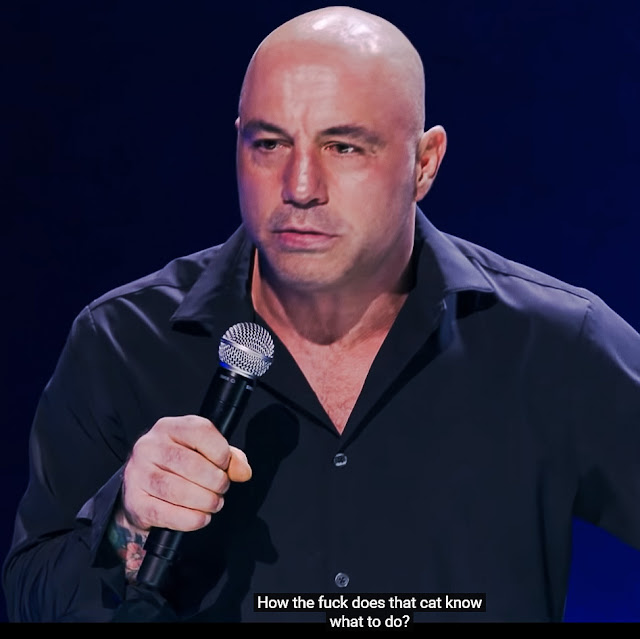 I guess Joe Rogan is like Marmite: you hate him or love him. He screams out the fact that he is right-wing - far-right? He must be a bigtime republican with a cabinet full of guns and dogs whimpering at his feet.
He's just admitted to using the n-word in his podcast multiple times. He says that he's not racist and the use of the word was taken out of context by people who want to get at him.
He has promoted the anti-vax movement which has cost lives. He admits that he should have been more careful. A lot of criticism has been dumped on him by artists with Joni Mitchell and Neil Young quitting Spotify.
And others are following. He is on a $100 million contract with Spotify. They can't get rid of him. I guess he is too popular. People like this brand of rude comedy and hard-boiled chat.
I hate the crude way he denigrates the domestic cat. He knows a bit about cat behavior and has used that knowledge to take the piss. The F-word is used copiously. Too much for me. It sounds crude after a while. He even rolls over on his back and pretends to lick his dick in mimicking a cat grooming. Charming. As I said: crude. Do you like what he says and his attitude?

Note: This is a video from another website which is embedded here. Sometimes they are deleted at source which stops them working on this site. If that has happened, I apologise but I have no control over it.
Email Post
Labels: Cat behavior cat hater comedy Joe Rogan