Are orchids poisonous to cats? 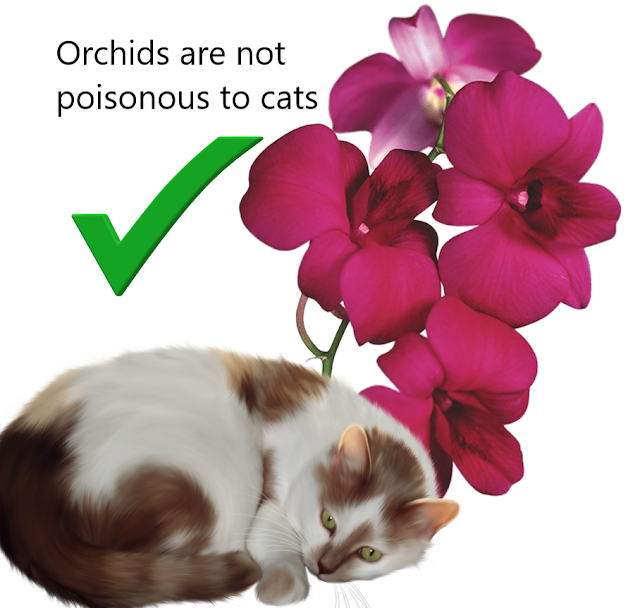 It is quite nice to know that eight sources tell me that orchids are not poisonous to cats. It's pleasant to know that because there are a lot of plants which are poisonous to cats. I am almost of the opinion that a cat owner should have no plants in their home! That would be too extreme but actually it applies to me. You just have to be careful and I don't want the worry because cats like to nibble plants because they like to nibble grass which is a plant.

Although orchids are non-toxic to cats, if a cat chewed on one substantially it might give them a stomach upset causing them to be sick. And there may be some pesticides on orchids. I don't know if there are but the commercialisation of growing plants probably indicates that some sort of toxic pesticide is used by the producer.

However, they have been declared safe on the Internet by people who know more than me about the toxicity of plants and therefore I take that information on face value and pass it on.

Although orchids are safe, they are expensive and they are expensive because of production costs and transportation difficulties as I understand it. Market forces might also be involved which I mean demand outstrips supply which automatically forces up the price.

If they are looked after well, they can last 15-20 years although they apparently become weaker producing less blossoms as they get older. I'm told that there are reports of some orchids living for over 100 years. But I guess when they are in someone's home, they might live 2-3 months.

The point that I am making is that perhaps the price is not as high as it seems if you take into account their longevity provided the conditions are satisfactory. They thrive in strong sunlight but not direct late afternoon sunlight. They also need a high humidity and air flow around the roots. And apparently, they need regular periods of drying alternating with heavy watering. They do best in temperatures above 50° but below 85°F.