Think of the companion animals killed by the floods in Germany

I feel compelled to write a quick note about the dramatic floods in Germany (and surrounding nations) which have killed around 160 people but the numbers will climb. And a shocking 1,300 are missing. They've put the floods down to climate change and a 1 in 1,000-year event. There are fears that there will be more of these events. Climate change or global warming is presenting as extreme weather not just a warmer planet.

Because about 160 people have been killed by these dramatic and devastating floods, it is a foregone conclusion that many companion animals have also been killed. News media is not talking about them because they talk about people first which I suppose is understandable. Update: 18th July: no news yet of companion animal rescue.

I have searched various news media outlets looking for stories about cats and dogs who have been rescued from these floods. I have not found any stories. I would like to remember those animals. Of course, I'm concerned about people and their relatives but I am equally concerned about companion animals. And, indeed, any animals including farm animals.

If these floods are due to climate change, they've been caused by the behaviour of people. The companion animals are innocent victims of human behaviour. You might argue that people are the authors of their own suffering as a consequence of these climatic catastrophes. But the same argument does not apply to animals.

Note: This is a video from another website. Sometimes they are deleted at source which stops them working on this site. If that has happened, I apologise but I have no control over it.
It would be another failure of the human-to-cat and dog relationship if these floods are due to excessive amounts of carbon dioxide and other global warming gases being expelled into the atmosphere.
Here is an addition to the page. A couple of guys in flood water with cat carriers and their cats inside. This is the first photographic evidence that I have seen of cat rescue in the floods. These guys are in Belgium which was also badly affected.

And here are two dogs in Belgium waiting to be rescued. The photo is from AFP/Getty: 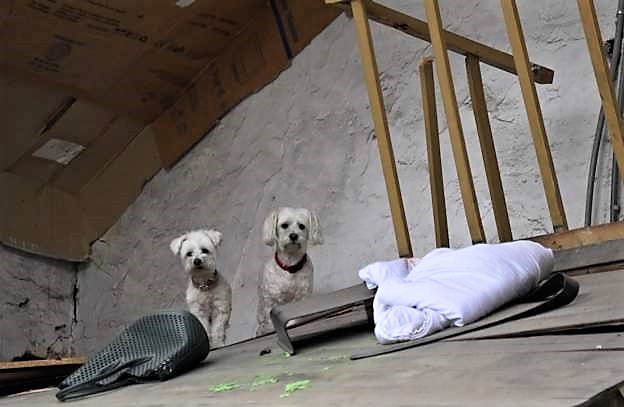 In Belgium a database of dog and cat owners has been made available to the emergency services who are operating in regions where there was heavy flooding. This will enable rescue workers to reunite animals with their owners. They will use the online dog ID and cat ID database systems but of course the animals concerned would have to be micro-chipped. The database became anonymized because of the European GDPR regulations, which is why they have to be formally opened to the rescue services. Apparently, in Belgium, rescue workers found numerous lost pets who had been dragged away by the force of the floods. We don't know whether these pets had been killed or were alive.

One problem with the floods is that in Germany there was insufficient warning. This was a major factor in the loss of life because both homeowner or home occupier and their companion animals were unable to get out of the way of the flood waters.

I will update the page if the news media report on any animal rescues and the meantime I would like to express my concern that as many dogs and cats survive as possible.