- July 01, 2021
This is a further post on this topic which has flooded the news media in the UK and internationally. I have updated my extensive page on the trial of this man and the cruel things he did to the indoor-outdoor domestic cats of Brighton. He stabbed 16 cats (perhaps more) and killed 9 outright and seriously injured 7. In this post I simply want to focus on the good news that he has been convicted. He was tried in his absence as he disdainfully did not attend his trial. The judge made the point that he must have caused a lot of distress and emotional upset to the owners of these cats.

He was caught when making a silly mistake otherwise he might still be doing it. He was caught on a CCTV camera when he came back to check out the camera. He must have felt that he had been videotaped, He was concerned and returned. That is my interpretation of it. He also photographed the cats and pictures were found on his smart phone.

Also, the knife that he used to stab the cats was found in his property and on the blade was the DNA of a cat or cats. Despite the fact that the video was not of great quality, the evidence stacked up to the point where his conviction was almost certain. The jury didn't take that long to decide that he was guilty.

But for the mistake that he made regarding the security camera, the police probably wouldn't have caught him because they were scratching their heads for about 12 months. He worked quite surreptitiously when he was seen around the area behaving unusually. He used a Leatherman tool with an included knife to kill the cats. Nine were killed by stabbings and seven survived. He befriended the cats then violently stabbed them to the body.

There was a huge amount of trauma by the cat owners and the cats. Cats were seen on the doorstep bleeding and owners were rushing their cats to veterinarians to try and save their lives. Steve Bouquet is very easily recognised by his appearance because as you can see has a totally bald head and a rather stark appearance. He is a bouncer by trade. 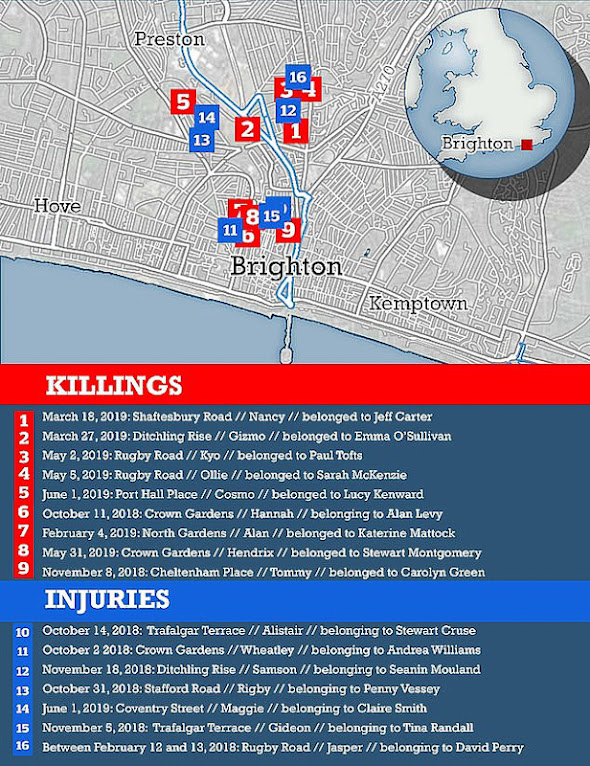 When interviewed by the police he said that he wasn't a threat to animals. The security camera was attached to a property of one of the cat owners whose cat, incidentally, was stabbed and died (Hannah). Both him and a neighbour whose cat also was stabbed and died (Hendrix) analysed the video material and decided that they had caught the man and reported it to the police.

The attacks went on for about 12 months and it was quite clear that the cats had been stabbed in the same way. Veterinarians confirmed that these were deliberate stabbings by a person judging by the type of injury.

He had to be tried on criminal damage because domestic cats are regarded as property. You can't try a person for murder for the killing of a cat by stabbing. You can't try him for grievous bodily harm or an assault because the cat is not seen as a sentient being by the law but as an inanimate object. That certainly applies in the UK and probably applies in all other countries as well. I guess that he was not tried for cruelty to animals because criminal damage potentially carries a bigger sentence.

However, there is a shift towards recognition that cats are sentient beings and the law might or should be altered. Certainly, the emotional damage done to their owner should be taken into account when punishing crimes such as perpetrated by Steve Bouquet.

He is waiting to be sentenced. Bearing in mind the large number of cats that he stabbed and killed or badly injured and the planned and devious way he carried out his crimes, I would hope that he receives a reasonable prison sentence, perhaps about five years. If he, does it would be a result because in general the criminal courts tend to under-punish criminals who abuse and kill animals whether they be domestic or wild.

This is a result of that continuing attitude of human beings that animals are lesser creatures to humans. This belief goes back hundreds of years and it is outdated.
cat abuse cat cruelty Cat News killing cats
Location: Brighton, UK