"Vigilante" Traps Neighbour's Cat to Protect His Own

- June 17, 2015
This is an interesting cat story.  It concerns the town of Bristol in the United Kingdom.  A man who says that he is an animal lover and who cares for quite an elderly cat says that he was forced to trap a neighbour's cat who he claims was being aggressive towards his cat.  After he had trapped the neighbour's cat he photographed the trap with the cat inside and attached to the photograph the words:

“If this is your cat please do the right thing and have him neutered.  No harm has come to this cat, however the cat trap will continue to be set to try and deter him."

The photograph and the text were made into a poster which he stuck up around the neighbourhood.  Antonio, the owner of the trapped cat ("Murray")  discovered the poster and was distressed to see his cat inside a trap. No doubt Murray was distressed too.  He had no idea how long his cat had been inside the cage.  He makes a good point that Murray could have ended up being in the cage during hot weather for quite a long time which could result in him becoming very ill.  He said that Murray is neutered and that he is not aggressive.

Murray went missing last week for quite a while and when he returned he was scared of people.  This is unusual for Murray.  Murray then stop eating food and his owner thought he was unwell.

Murray's owner responded to the posters by replacing them with one of his own in which he asks the "vigilante" to come forward. 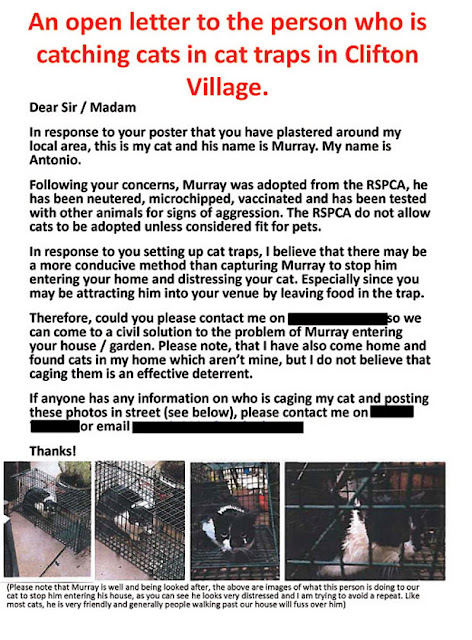 The police and the RSPCA were investigating.  Soon afterwards a man claimed responsibility for trapping Murray but he insisted that he was acting to protect his own cat.  He wishes to remain anonymous but said:

“I'm a cat lover, first and foremost.  It pains me more to see animal suffering than it does humans.  My cat in animal years is 78 years old...  My cat has befriended many cats over the years.  This new cat arrived and is doing what cats do, I understand that.  But it's particularly aggressive, I've never seen a cat like this.".


The "vigilante" consulted a local cat charity who advised him how to set the trap and provided one so that they could take the cat to a local vet and then discover who the owner was (through the microchip).  He has now decided to stop trapping cats.  He said that he will return the trap to the charity.

This is an entirely new form of human behaviour concerning the domestic cat.  It's the first time that I have read about somebody trapping a cat to try and protect their own cat.  It seems to be entirely inappropriate and quite possibly illegal.  What I mean is that it may be a crime depending upon the outcome.