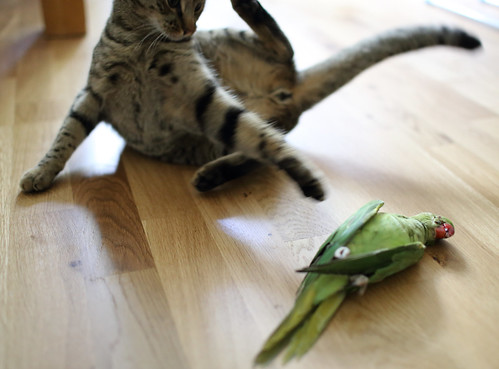 The researchers concluded that five females of this species of wildcat made the transition from being wild to being semi-domesticated within settlements where they were safe from predators and where they had a ready supply of rodents as prey which infested the settlers' homes and granaries.

As all the feral cats in the world today come from domestic cats then we have to say that all of the domestic, stray and feral cats on the planet today are descended from five female cats of the species felis silvestris lybica.

The research was carried out by Carlos Driscoll of the US National Cancer Institute and colleagues including David MacDonald of Oxford University. They spent more than 6 years analysing the DNA of wildcats,  purebred cats and house cats.

They discovered that the DNA of all house cats (including of course purebred cats) fall within the DNA cluster of the Near Eastern wild cat.  This made this subspecies of wildcat the ancestor of the domestic cat.

Source: NY Times June 29th 2007. The photo is of my tabby cat in whom you can see the North African wildcat ancestor!