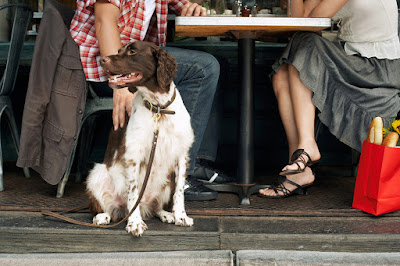 I suppose it goes without saying that when a new law is being debated in the New York Senate concerning whether they should allow dogs to accompany their masters into outdoor areas in restaurants in the state of New York, cats are bound to be omitted from the discussion because cats don't do well on leashes, do they?  Well, a lot of cats do just fine on a leash although it does take longer to train them.  It's a great shame that cats are difficult to train to accept a leash and also that they are essentially solitary creatures and not pack animals because it makes them unsuited to accompany their owner to a restaurant or so the legislators believe.

In May 14, 2015 it was reported that the legislature of New York state were debating the right of dog owners to take their dogs to outside areas of restaurants.  The impression was that the bill would be passed.  Provided the dog is accompanied by the diner they will be allowed into outdoor eating areas.

Under the new law (not yet enacted) dogs will have to be kept on leashes.  Dogs cannot set foot inside the restaurant and they will enter through an alternative entrance.  Dogs will not be allowed into any outdoor areas where food is prepared.

It does seem very natural to allow a dog to eat with his owner because I'm sure that this happens a lot at home.  As mentioned, the bill makes no mention of cats being allowed in outdoor areas of restaurants.  Is the bill discriminating against cat owners? I wonder why they couldn't include cats into the legislation because there are cats around, as mentioned, who act rather like dogs and who are comfortable on a lead.  Provided they complied with all the rules are set out under the new legislation, I cannot see any reason why they should not be allowed to do what dogs can do.

Ah, I have just thought of a reason: the dogs will chase the cats! Therefore this is discrimination. Another form of discrimination is that cats are taken to the vet less than dogs.

The bill and the discussion indicates that people think that companion animals are inherently a health hazard to people otherwise the legislators would have allowed cats and dogs to company people to restaurants in the past.

As an aside, I consistently read that people who look after companion animals are some of the most prolific lobbyists of legislators in the USA.  They write the most e-mails and make more calls to politicians than other people.  This indicates a passion which we know that cat and dog owners have.

At the moment, as far as I know, California is the only state allowing dogs in outside areas of restaurants.